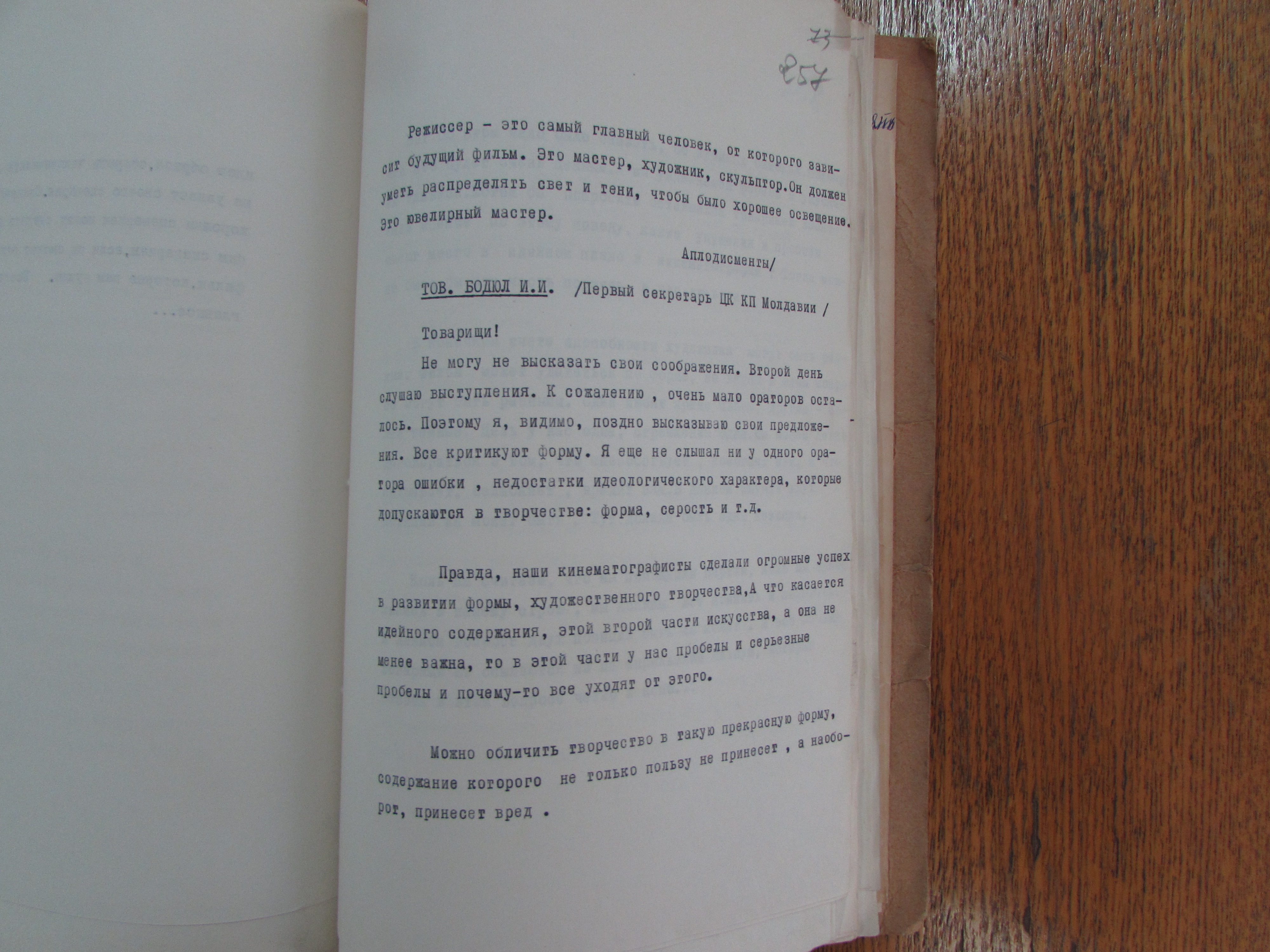 The Second Congress of the MUC marked, on the one hand, the apex of the cinematic production and professional creativity of Soviet Moldavian filmmakers. Emboldened by the international success of such recently released films as Poslednii mesiats oseni / Ultima lună de toamnă (The Last Month of Autumn), the MUC was optimistic about its future perspectives and the mass impact of its productions. On the other hand, this Congress also foreshadowed the future ideological crackdown that was to be initiated in the early 1970s. The speech by Ivan Bodiul, the highest-ranking Party dignitary of the MSSR, was ominous in this regard. Bodiul openly attacked the “ideological mistakes and flaws” that apparently characterised many of the recent productions, accusing the MUC members of focusing too much on “form” instead of “ideological content.” Bodiul argued that, while certain movies might suffer from a “formal,” i.e., artistic, point of view, they could be quite useful ideologically, and vice versa. To illustrate a negative example of an “ideologically flawed” film that nevertheless was well received by critics, he referred to The Last Month of Autumn, released in 1965 and awarded several international prizes. In Bodiul’s opinion, the film suffered from “two political inaccuracies that cause a lot of harm.” The first concerned the contrast between modern technology and the depiction of poor peasants, which for Bodiul meant a “distortion of the Party’s policy.” The second problem was more serious: the director was accused of “sympathy for a kulak woman” featuring as a character in the movie. Bodiul openly stated that such flaws – which were to be “uncovered and firmly swept away” – were contributing to “bourgeois propaganda” and called for a much more careful political screening of films at the Party level before their release, which amounted to an argument for direct Party interference in the creative process. In his final remarks, Bodiul stated that he would be “opposed” to any nomination of the film for a state prize, as long as these “ideological flaws” persisted. The priorities of the Party leadership were thus outlined unequivocally by the first secretary and would lead to an increasingly harsh and intolerant attitude on the part of the regime in the years to come. This hardening “Party line” was supported and reinforced by two subsequent speakers who elaborated on Bodiul’s theses. The first was the secretary of the USSR Union of Cinematographers, Alexandr Karaganov, who emphasised the lack of a social and “revolutionary” dimension in recent Soviet films and the losing of the ideological battle with Western “film propaganda” that this entailed. Karaganov also discussed the Czechoslovak example of “ideological deviation” and the successful Western “infiltration” of the profession there, interpreting it as a dangerous warning against any ideological relaxation. The second speaker was Dumitru Cornovan, the secretary of the CC of the CPM responsible for ideology, who focused on the threat of “bourgeois nationalism” and attempted to define the Party’s interpretation of the acceptable “national form and national specificity in art.” He condemned the “exaggeration of national differences” and attacked any artistic forms “extolling archaic national traditions”, viewing such themes as examples of the “ideological war” waged by the West against the USSR. He also referred to the particular attention that “Western propaganda” devoted to the Moldavian SSR, emphasising the “distortion of the history of the Moldavian people, the denial of our peculiarity, our independence and even the right of our republic to exist.” He also inveighed against the Western “fomenting of nationalist tendencies” and against attempts to “undermine the friendship between various Soviet peoples.” This amounted to a full-scale agenda of repressing any forms of opposition, which was applied under Bodiul’s leadership in the early 1970s and connected alternative forms of cultural expression to open displays of political dissidence.