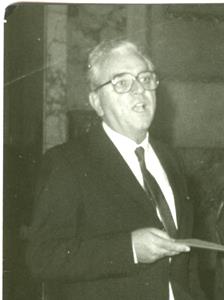 Professor Branko Hanž was an employee of the National and University Library in Zagreb from 1951 until 1987, and was also assistant director in the period from 1972 to 1983. He is the founder of the Collection of the Press in Exile, later renamed the Foreign Croatica Collection.

His job was to take care of the collection items and he was also in charge of the D-lockers located in the director's office. He liaised with Croatians in the exile during the socialist period and after its collapse. In the 1990s, when the Collection was open to the public, he was in charge of its use and promotion, and also authored two catalogues of the Collection.

Željka Lovrenčić says that he viewed cultural opposition as “Croatian unity”, “where the Croatian people cannot be divided into those living in Croatia and those who are in some way evil and live in the exile. In a word, this equates to unification not only of the publications but of Croatia too – the Croatian exile and the Croatian homeland.” His opposition activities were revealed in his maintaining of foreign collection items at the National Library, and his correspondence with émigrés Vinko Nikolić, Karlo Mirth and George J. Prpić.