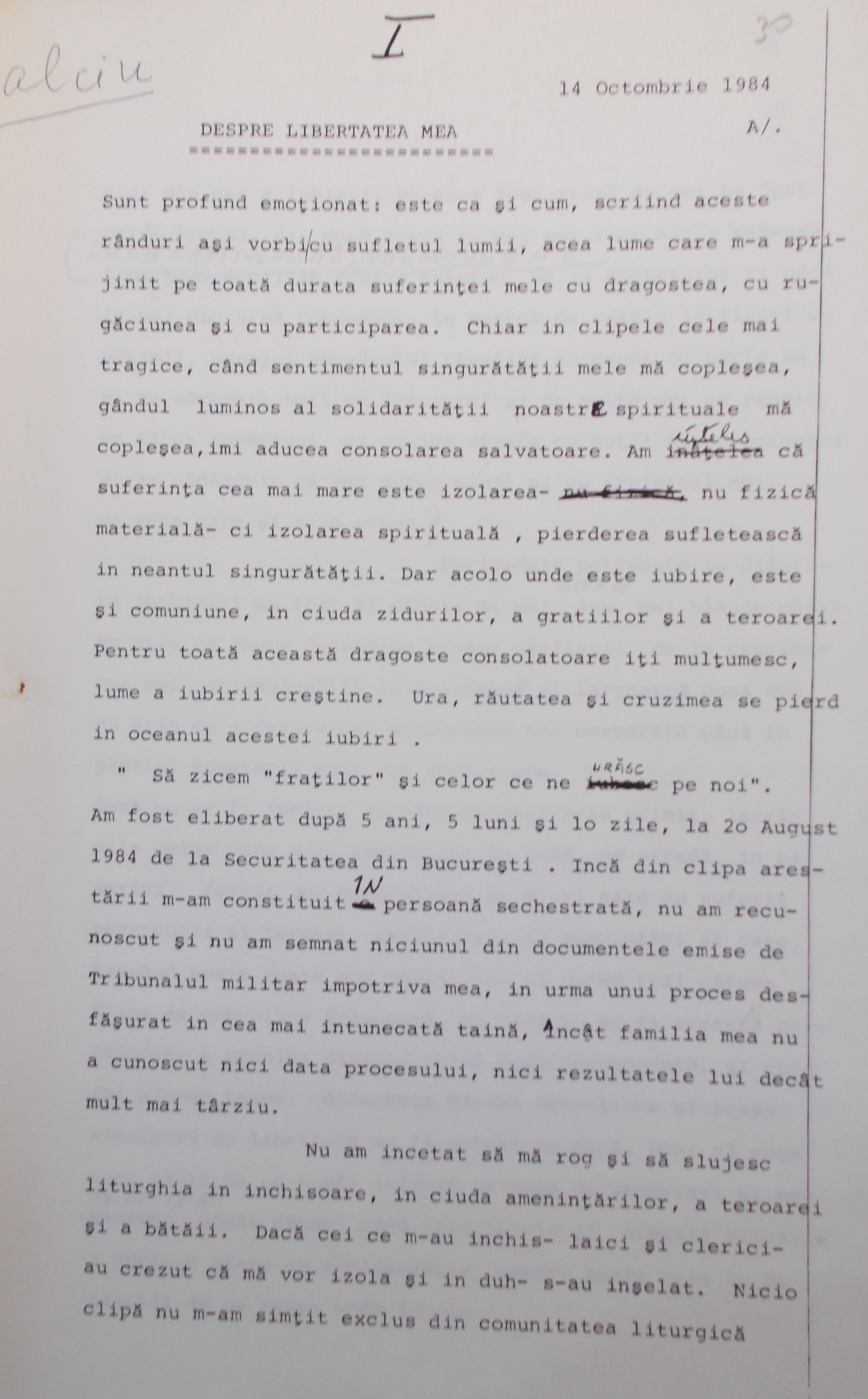 The many letters to be found in Monica Lovinescu and Virgil Ierunca’s collection are indisputable evidence of their commitment to using RFE’s broadcasts to protect Romanian dissidents from the abuses and acts of violence organised against them by the communist authorities. An illustrative example of this is the letter that Father Gheorghe Calciu-Dumitreasa sent to Monica Lovinescu and Virgil Ierunca in October 1984.

A former political prisoner, Calciu-Dumitreasa was imprisoned again in 1979 after delivering a series of seven sermons for young people the previous year. Through his sermons, Father Calciu-Dumitreasa hoped to strengthen the faith of young people whose Christian spiritual life was threatened by communist atheism and materialism (Petrescu 2013). The letter written by Father Calciu-Dumitreasa describes his situation and the situation of his family after his release from prison (August 1984) due to a huge campaign organised by the Romanian diaspora, and also makes known to the listeners of RFE’s Romanian desk his decision to emigrate.

At the beginning of his message, Calciu-Dumitreasa mentions that while imprisoned he refused any kind of collaboration with the regime. Furthermore, he continued to perform his duty as a priest despite the threats, terror, and beatings he was subjected to by the communist authorities. After his release, Calciu-Dumitreasa has been welcomed by his friends, acquaintances, and former students but to his very great disappointment the Romanian Orthodox Church has decided to strip him of the priesthood. Thus, in his letter he urges the Orthodox Church’s hierarchs to reconsider their position regarding his removal as he has proved to be a faithful defender of Christian values even in the most unfavourable circumstances. Moreover, the Securitate continues to watch each of his movements and its "unbated persistence in hate and malice" means that persecution against him and his family has continued.

In this context, Calciu-Dumitreasa mentions that despite his immense investment of love, faith, and suffering in "our country and Church," he has decided to emigrate due to the harassment his family continues to be subjected to by the Securitate. At the end of his letter, Calciu-Dumitreasa expresses his belief that those who have stood by him in difficult times in Romania will also surrender him with their love into his forced exile.