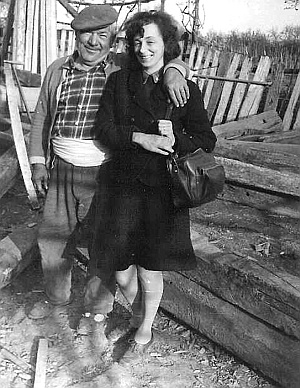 Hedwig Ulrike Ruşdea (née Weindel) was a specialist in pre-industrial mill technology, who established herself at the Museum of Folk Technics (later ASTRA Museum) by identifying, researching, and rescuing many windmills from the region of Dobrogea, which she reassembled in the permanent open-air exhibition of the museum in the 1960s and 1970s. She was born in Sibiu on 20 June 1924 into a family of Transylvanian Saxon intellectuals. Her parents were doctors and researchers in the field of natural sciences. After leaving the Girls’ High-School in Sibiu in 1943, she enrolled in the Faculty of Medicine of the University of Cluj. In 1947, she abandoned her medical studies in favour of German studies at the same university. In 1951, she completed her undergraduate degree in German studies at the University of Bucharest because the department in Cluj had been closed. From 1955 to 1957, she worked at the official German-language newspaper in communist Romania, Neuer Weg. In 1953, she married the Romanian doctor Dan Ruşdea. From 1958 to 1961, she worked with researchers at the Sibiu branch of the Romanian Academy on the project entitled Dictionary of Transylvanian Saxon Dialects (Siebenbürgisch-Sächsischen Wörterbuch).
In May 1962, she was hired at the Brukenthal Museum where, under the coordination of Cornel Irimie, she contributed to the foundation of the Museum of Folk Technics. After 1964, she was in charge of the part of the permanent open-air exhibition dealing with pre-industrial means of transportation. She was also part of the museum’s teams that conducted field research. She specialised in pre-industrial mills, and coordinated the rescue of five windmills from Dobrogea. Her comparative research on Romanian windmills earned her international recognition. Together with Cornel Irimie, the director of the Museum of Folk Technics, she attended the Second International Symposium of Molinology in Copenhagen in 1969. Subsequently, she was invited to deliver presentations at many international conferences on this topic. She later used her experience as a researcher at the Museum to found the Heimatmuseum (Transylvanian Saxons’ Homeland Museum) at Cisnădioara (Michelsberg in German) in 1971. In 1987, due to the severe travel limitations on foreign travel and everyday shortages of basic products in the Romania of the 1980s, Ruşdea emigrated to Germany, where she continued her researches in molinology. She died on 18 February 2009 in Heidelberg.
Due to her remarkable achievements, Ruşdea established herself as a leading ethnographer at the Museum of Folk Technics in Sibiu. She contributed decisively to the rescue of a cultural heritage that would otherwise have been destroyed by the communist regime’s agricultural modernisation drive. She also conducted ethnographic research in the villages from which artefacts of peasant technics were rescued. This field research produced valuable historical and social data about rural society in Dobrogea and the effects of communist modernisation policies on its cultural heritage.