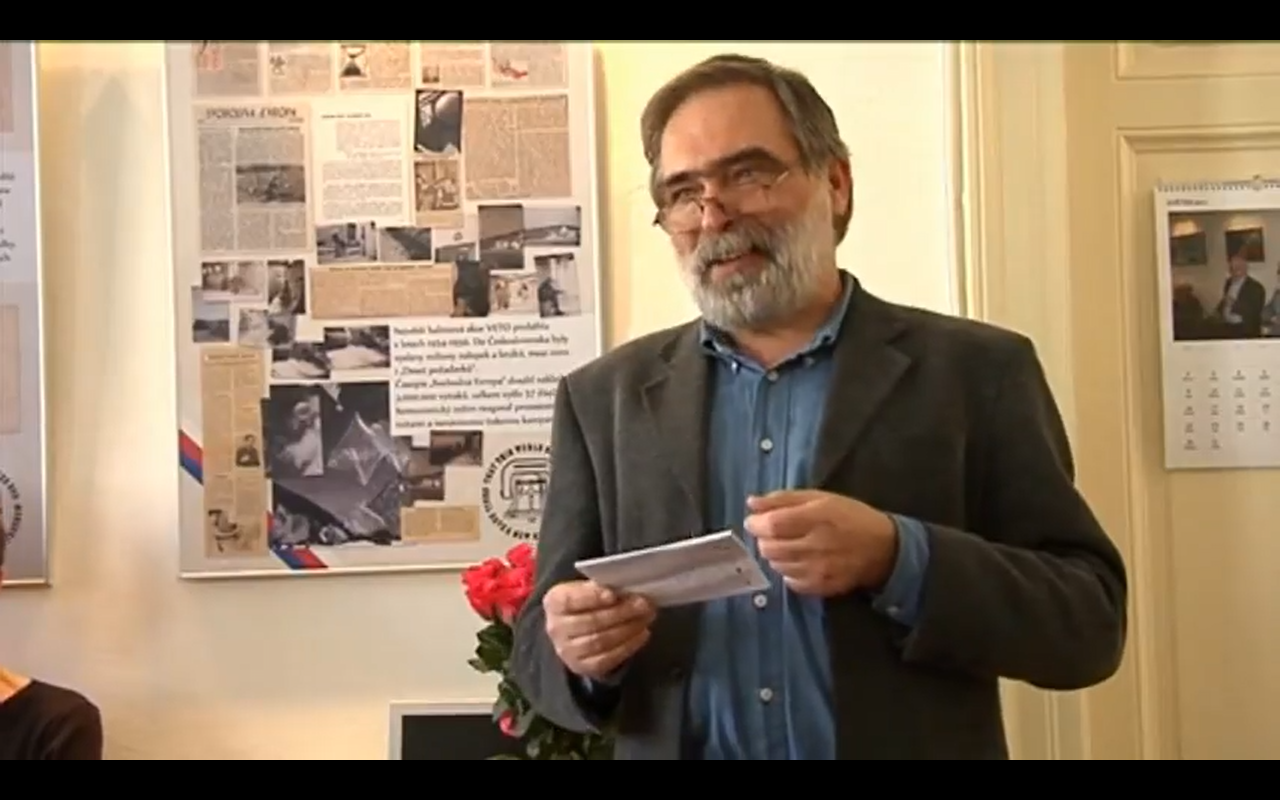 Jiří Gruntorád is a Czech librarian, founder and director of the Libri Prohibiti Library. After elementary school he apprenticed as a forester and afterwards, he worked in different professions such as forest worker, tram conductor, bricklayer, stoker or storeman. In 1968 he liked to listen to foreign radio stations and his favourite music was representatives of alternative culture or the underground, such as the band “The Plastic People of the Universe” or songwriters like Karel Kryl or Vlastimil Třešňák. He was in touch with the underground scene from the late 1960s. It was books that became Gruntorád’s destiny, though. He entered the samizdat scene in the second half of the 1970s when he worked as a bricklayer in the District Administration of Housing Estates. In 1978 he was asked to fix a wall in dissident Václav Benda’s flat, who he later befriended and who familiarised Gruntorád with the samizdat. Gruntorád recalled the first moment he encountered the samizdat with the following words: “When I saw it for the first time, it was like a revelation for me. Besides the fact that it is a medium with an impact comparable to the Internet of today, it facilitated also a kind of spiritual connection. It enabled me to get to know many people that I could not meet in person and that I only met many years later. This spiritual connection was the most important quality for me. Next to it was, of course, the artistic quality that was, in the case of some works, really high. They brought energy and motivation.” It was this motivation that inspired Gruntorád later to publish samizdat texts banned in Czechoslovakia, be it poetry, prose, expert texts or various pamphlets. In 1978 Gruntorád published a typed copy of Jaroslav Seifert’s poetry book “Morový sloup” (The Plague Monument) as the first publication in the newly created samizdat edition “Popelnice” (The Dust Bin). In the following year, he signed Charter 77 and was sentenced for illegal arming (despite it never having happened) and he spent three months in prison. After his release, he continued publishing samizdat literature with the help of his friends and professional typists. He managed to publish thirty books until he was taken into custody in December 1980 again and later sentenced to four years of imprisonment for distributing samizdat texts and non-official music recordings (officially for the so-called “subversion of the republic”). Thanks to Gruntorád’s friends, there were new books published in the Popelnice edition. From 1981 to 1983, Gruntorád was held in one of the most cruel Czechoslovak prisons in Minkovice, North Bohemia. Part of his sentence was also served in a prison in Valdice in the Jičín District where he met poet and artistic leader of the underground band, The Plastic People of the Universe, Ivan Martin Jirous, nicknamed Magor (The Lunatic) and whose best-known poetry book “Magorovy labutí písně” Gruntorád smuggled out of the prison. In December 1984, he became involved again in publishing of samizdat books despite being under so-called security surveillance; he had to report himself to the police every day and he was assigned where he could live. In total, almost 130 books were published in the Popelnice edition, mostly typewritten A5 format. These were texts that were difficult to find in other samizdat editions or texts that were originally published by exiled publishers, though there were also new books. Gruntorád’s collection of samizdat literature made up the basis of the Libri Prohibiti Library that Gruntorád founded in 1990 and has been the director of ever since.

From 1990 to 1995 Jiří Gruntorád was the secretary of the Committee for the Defence of the Unjustly Prosecuted (VONS) and in 1994 he became a regular member. Gruntorád was presented with many decorations for his activities; among other things, he was awarded the Medal of Merit of 1st grade in 2002 by Václav Havel and in the same year Magnesia Litera for his merits for Czech literature. From 2007 to 2010 he was a member of the scientific council at the Institute for the Study of Totalitarian Regimes.