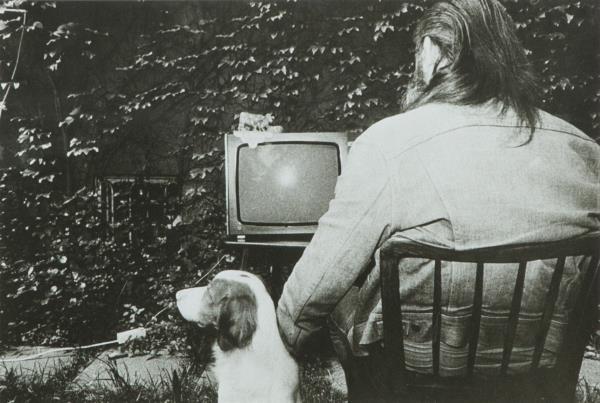 The third performance from the Homage to Josip Broz Tito cycle, "Watching Television," was performed by Tomislav Gotovac in Vjesnik's Bookstore on the so-called Flower Square (the former Square of Brotherhood and Unity) in Zagreb on Sunday, June 8, 1980. It lasted from 6.30 p.m. to 8.30 p.m. and was photographed by Milisav Mio Vesović and Ognjen Beban.

According to Ana Lendvaj, the intention of the third performance was to ˝focus on the media itself: the colour television and the absorbed viewer are the content of that action˝ (Lendvaj, “Watching the Television,” 1980). The third performance was done after the death of President Tito, at the same time after the largest manifestation, probably in the entire history of Yugoslavia, of the uniformity of the Yugoslav media system, which in the days following Tito's death practically had only one news item in the media space. The artist used subversive action, in which he did not criticize the regime, but encouraged the public and the regime itself to think.