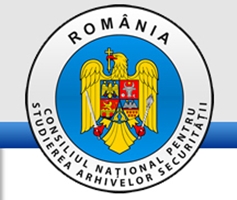 The National Council for the Study of the Securitate Archives (Consiliul Național pentru Studierea Arhivelor Securității – CNSAS) is the official authority in Romania which operates under the control of Romanian Parliament and administers the archives of the former communist secret police, the Securitate. The CNSAS Archive is the third largest archive of its kind in Europe. Beginning with the so-called “Proclamation of Timișoara” of March 1990, which was conceived among others by underground poet Ion Monoran and typewritten with a featured item from his private collection currently described in the COURAGE registry, the emerging civil society in Romania pressed for the opening of the secret police archives and the enforcement of lustration. This goal was partially achieved only after a decade, with the establishment of CNSAS, in accordance with Law 187/1999. The current legal framework governing the activity of CNSAS consists of Governmental Emergency Ordinance (OUG) 24/2008 modified and completed through Law 293/2008.  According to the law, CNSAS has a triple mission.

(1) As an archive, CNSAS ensures the free access of individuals – Romanian citizens and foreign nationals who were citizens of Romania after 1945 – to their personal files devised by the former Securitate during the period March 6 1945 to December 22 1989. Regarding the accessibility of these archives, a major change occurred when a massive transfer of documents to CNSAS was made during the period March–December 2005, and consequently the holdings of the CNSAS archive increased from approx. 9,400 files comprising approx. 19,000 volumes (around 700 linear metres) to some 1.3 million files comprising over 1.5 million volumes. Currently, the archival holdings amount to over 2 million volumes (around 25 km). The Archives of the CNSAS are arranged according to the logic of its founder, that is, the former Securitate. The main collections which preserve documents related to activities of cultural opposition are: the Penal Fonds (files of those put on trial), the Informative Fonds (files of those put under surveillance), the Romanian Exile Fonds, the Manuscripts Fonds (confiscated materials), and the Documentary Fonds. To these collections of documents created before 1989, either by the secret police or by those it kept under surveillance, we may add the Oral History Archive, which includes interviews with former victims of the Securitate who came to consult their files. From the documents included in these collections, it is possible to define – to the benefit of potential researchers – a multitude of ad-hoc collections, which gather all those records related to the repressed cultural activities of a certain groups or isolated persons. This is especially important in the case of those individuals who did not or could not preserve anything related to their pre-1989 underground cultural activities.

(2) As a public authority entrusted with transitional justice, CNSAS contributes to the process of restitution by providing to victims in search of legal compensation and rehabilitation the necessary documentation on the basis of Law 221/2009 regarding political sentences passed between 1945 and 1989. Above all, on the basis of its founding legal frame and additional legislative changes, CNSAS discloses former agents and informal collaborators and exposes the repressive actions of the former communist secret police in accordance with the principles of the rule of law. The founding Law 187/1999 was intended to accomplished what might be called “one-dimensional lustration” (D. Petrescu 2007), which focused only on former secret police agents and collaborators, but spared former nomenklatura members and party bureaucrats, who had actually supervised the activity of the Securitate. The Romanian law identifies the wrongdoers not on the basis of the office they held, but on the basis of the past deeds. In other words, it defines the acts of collaboration with the former secret police on the principle of individual guilt, proven beyond reasonable doubt on the basis of individual deeds which represented violations of fundamental human rights and thus infringements of the communist constitution. The current legislation, passed in 2008, restricted this definition of collaboration by introducing the “principle of simultaneity,” which incriminates only those past deeds that not only violated fundamental human rights, but also represented denouncements of actions or attitudes against the communist regime. In the absence of a legal lever to enforce lustration, however, the main accomplishment of the CNSAS activity is “public exposure without lustration” (D. Petrescu 2017). In this respect, the screening of the former Securiate documents by CNSAS has triggered constant public debates on the meaning of resistance to, and collaboration with, the pre-1989 regime in Romania, and fundamentally changed the black-and-white description of Romanian society under communism by revealing the multitude of lived experiences of individuals seeking to cope as best they could with the system (C. Petrescu 2014, D. Petrescu 2014).

(3) As a research institute, CNSAS creates and disseminates knowledge on the repressive dimension of the communist regime, playing a fundamental role in the process of coming to terms with the communist dictatorial past. Its political, social and cultural role resides in educating younger generations, who do not have a direct experience of the communist past, in the spirit of democratic values by emphasising the non-democratic essence of the former regime, which is epitomised by the acts of violation of human and citizen rights and liberties. Accordingly, CNSAS is engaged in a wide range of dissemination activities. (3.1) The institution reaches the general public through travelling exhibitions on the communist period, of which the most popular are “The Securitate as instrument of the dictatorship” and “My youth under communism.” (3.2) CNSAS addresses in particular the young generation by offering internships to university students and organising documentary visits in collaboration with high-schools and universities. (3.3) The most efficient dissemination is performed via on-line resources. CNSAS has devised an educational section of its website dedicated to digital resources, where it posts original documents from the Securitate archives, as well as scholarship and teaching support materials produced by its own researchers. All materials can be downloaded for free.

CNSAS is a founding member of the European Network of Official Authorities in Charge of the Secret Police Files, which was established on 16 December 2008 in Berlin. This network comprises seven institutions entrusted with transitional justice: the Federal Commissioner for the Records of the State Security Service of the Former German Democratic Republic, Berlin; the Institute of National Remembrance, Warsaw; the Institute for the Study of Totalitarian Regimes and Security Services Archives, Prague; the Nation’s Memory Institute, Bratislava; the Historical Archive of the Hungarian State Security, Budapest; the Committee on Disclosure of Documents and Announcing Affiliation of Bulgarian Citizens to the State Security and the Intelligence Services of the Bulgarian National Army, Sofia; and the National Council for the Study of the Securitate Archives in Bucharest. These institutions cover the territory of the countries where communism collapsed in 1989 and are based in the Federal Republic of Germany, Poland, the Czech Republic, Slovakia, Hungary, Bulgaria, and Romania. This network collaborates in the field of education, research and dissemination of knowledge regarding the former communist secret police agencies in the Soviet bloc.

CNSAS. 2016. “The European Network of Official Authorities in Charge of Secret Police Files: A Reader on the Legal Foundations, Structures and Activities.” Accessed May 2. http://www.cnsas.ro/documente/reteaua%20EU/READER%20European%20Network.pdf

CNSAS. 2016. “Handbook of the European Network of Official Authorities in Charge of the Secret Police Files.” Accessed May 2. http://www.cnsas.ro/documente/reteaua%20EU/Handbook%20of%20the%20European%20Network.pdf

Petrescu, Dragoș. 2007. “Dilemmas of Transitional Justice in Post-1989 Romania.” In Lustration and Consolidation of Democracy and the Rule of Law in Central and Eastern Europe, edited by Vladimira Dvořáková and Anđelko Milardović, 127–151. Zagreb: Political Science Research Centre.

Petrescu, Dragoș. 2014. “The Resistance that Wasn’t: Romanian Intellectuals, the Securitate, and ‘Resistance through Culture’.” In Die Securitate in Siebenbürgen, edited by Joachim von Puttkamer, Stefan Sienerth and Ulrich A. Wien, 11-35. Cologne: Böhlau Verlag.