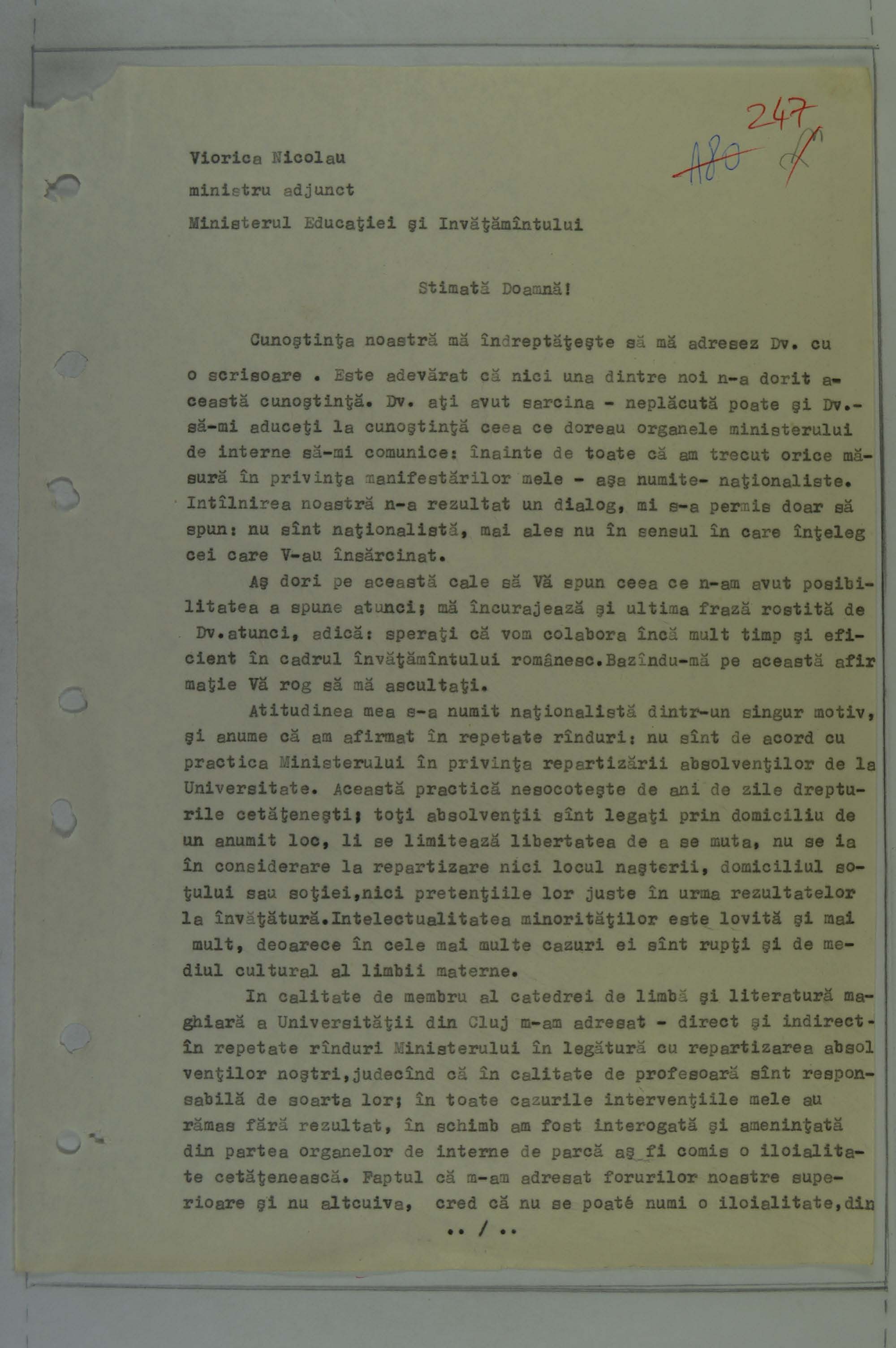 The term “repartition” – the act of assigning a professional job to university graduates requires some explanation. Prior to 1989, university graduates in Romania were assigned to a workplace by the Ministry of Education through a centralised system. The position assigned as a result of “repartition” could not be abandoned by the new graduate for three years (or two years in the case of those who had an overall grade over 9 out of 10), otherwise the person in question could not continue working in his/her field. “Repartitions” were carried out in accordance with a list of workplaces compiled by the Ministry, and fresh graduates could choose a place of work upon consideration of their accomplishments and other points of view. Quite often this led to the destruction of projected marriages, as couples could not get places together unless they were already married before the “repartition.” (Cs. Gyimesi 2009).

In order to understand the importance of the selected feature item it is necessary to provide details regarding the context. Hungarian students of Babeș-Bolyai University of Cluj-Napoca, Faculty of Philology, almost exclusively opted for Hungarian paired with a foreign language, or for a foreign language as major paired with a minor in Hungarian language. In 1985, graduates in Hungarian and a foreign language (English, German, French, Russian) were offered five places in Transylvania (two of these in cities) and sixteen positions in the other regions of Romania, all of them in the severely deprived countryside. In fact, most teaching positions for university graduates in communist Romania were in remote places in the countryside, since all major cities were “closed,” which means that no working place in those cities was available in the 1980s. When it came to occupying the two more advantageous positions in Transylvanian cities it turned out that these were listed only as a trick, as these positions were not made available to Hungarian candidates on the grounds that they were “high responsibility positions” that fell within the competence of the Securitate. The nominal list of advertised positions shows that graduates majoring in Hungarian were assigned to posts exclusively in schools located in the so-called Old Kingdom of Romania (i.e. Wallachia and Moldavia, regions where there was not a significant Hungarian element in the population) or in Romanian-medium schools in Transylvania, where they were forced to teach their secondary academic discipline (Russian, German, etc.) to Romanian children. Not a single position was offered to these graduates in the counties of the overwhelmingly Hungarian-populated Székely Land in eastern Transylvania, although there was a clear shortage of Hungarian teachers and also despite the fact that schools in these counties forwarded their demand for about 30-40 newly-graduated Hungarian teachers to the central authorities. It would have served as an alleviating circumstance in this respect if the Hungarian graduates had been given the possibility of teaching the foreign languages they had studied as a secondary academic discipline subordinate to Hungarian in the settlements they were sent off to. However, most of them did not have this opportunity, as the schools of the listed localities beyond the Carpathians did not even have departments for the foreign languages these graduates had been forced to accept, or they were given only a few classes of foreign languages together with classes of gymnastics, handicrafts, music, etc. in order to make up the twenty-two weekly classes required for a full-time position.

Encouraged by their tutor, Gyimesi, the 1985 graduates issued a protest against the official procedure by collective absence from the place-selection meeting. They submitted their complaint to the Ministry of Education in a memorandum signed by all of them, requesting the modification of repartitions that had in the meantime been resolved ex officio. Many prominent Hungarian personalities in Romania also protested against the discriminatory repartitions in a joint petition (Edgár Balogh, Sándor Kányádi, György Beke, etc.); nevertheless, collective action yielded no results whatsoever. Freshly graduated teachers were vigorously called upon to compulsorily occupy the jobs imposed on them – failing to do so leading to their dismissal and the payment of a fine.

The extensive repartition manipulations had repercussions on Romanian higher education in Hungarian. As a result of the repartitions, the number of university applicants for Hungarian language and literature saw a considerable decrease, as the Hungarian teaching profession had no future under the given circumstances. At the same time the number of advertised university places was also reduced. By the academic year 1985–1986 the number of available places sank to just seven, a third of the number in previous years. Beginning with 1986, Romanian grammar was introduced as a compulsory subject at the entrance examination, which made things even harder for candidates from purely Hungarian-inhabited regions who had a poor command of Romanian. Moreover, after the entrance examination, at the start of the academic year it was announced that instead of the foreign language – which had also been a subject at the examination – the Romanian language would be the secondary discipline subordinate to Hungarian, and, similarly, a foreign language as a major was paired with Romanian instead of Hungarian as a minor. This practically meant that Hungarian students majoring or minoring in Hungarian language had no possibility of becoming qualified in a foreign language. A Hungarian student could only study English, German, French or Russian if he/she chose Romanian as a major.

Repartitions in the Old Kingdom of Romania affected not only philology graduates. In the same way hundreds of teachers of other subjects, engineers, doctors, etc. were placed in settlements beyond the Carpathians. The most striking case in this respect was that of the graduates of the University of Medical Studies of Târgu Mureș, predominantly Hungarians, who could only occupy jobs outside Transylvania, according to a centrally established territorial placement plan. The equivalent of this process in the opposite direction was that many graduates from the Universities of Bucharest, Iași, or Craiova received often repartitions in Transylvania. The undisguised trend unfolded according to the so-called homogenisation concept that was promoted nationwide. It was evident that the chances of students wishing to continue their studies in Hungarian gradually diminished, since their background of increasing educational deprivation in the Hungarian language represented a serious disadvantage in higher education. As a consequence of the central dispositions, many Hungarian teacher positions were occupied by unqualified substitutes lacking a degree. Children of Hungarian nationality were offered a single chance for advancement: if they stopped using their mother tongue. All this foreshadowed the disappearance of Hungarian intellectuals, the marginalisation of Hungarian language and culture, and gradual assimilation (ACNSAS, I017980/6, 136–144).

Under the given circumstances Gyimesi, who had endured harassment on multiple occasions, turned to Deputy Minister of Education Viorica Nicolau, with whom she had made acquaintance after the latter – along with the Cluj university rector and the central party secretary – had attended the disciplinary meeting on 10 October 1987. In the three-page memorandum deliberately dated 8 March 1988, the International Day of Women, Gyimesi tried to win over the deputy education minister as an ally in her efforts to find a more just and equitable solution to the repartition of graduates while making an appeal to the empathy of a women/mother in defending innocence (ACNSAS, I017980, vol. 1, 247–249; I017980/5, 70–73). The letter was broadcast on Radio Free Europe as well, with the obvious intention of drawing the attention of foreign forums to the defence of minority rights in Romania. Several Romanian colleagues expressed their feelings of sympathy to Gyimesi and conveyed their congratulations (Cs. Gyimesi 2009).