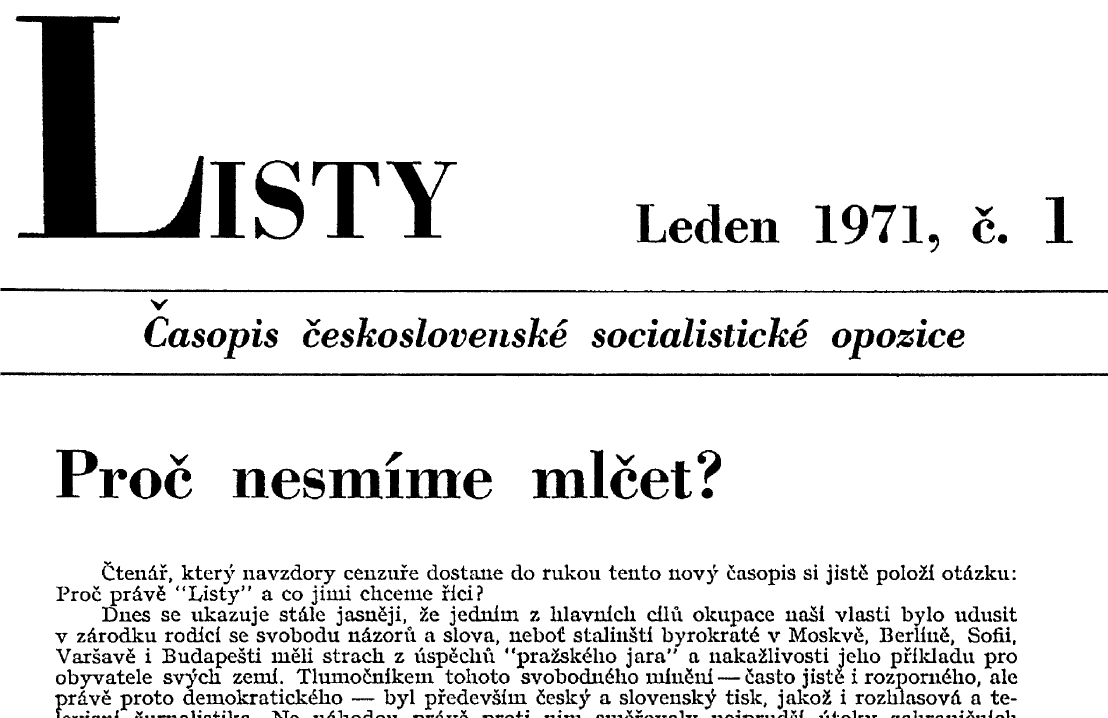 The magazine of the Czechoslovak Socialist Opposition, intended mainly for readers in Czechoslovakia, was published once every two months since 1971. This journal of political figures and publicists connected with the Prague Spring was created in 1970 in Roman exile thanks to the work of Jiří Pelikán, when two zero numbers with a head Forbidden Prague Literary Sheets was published. One year later, it began to come out periodically. Jiří Pelikán was originally the publisher of the magazine.

“Listy” was a left-wing opposition magazine, both domestic and exile, but they tried to remain open for authors of other political orientations. In particular, they included political studies, commentaries and analyses. Other inaccessible information from behind the scenes of communist politics, as well as small columns about the activities of communist parties in Eastern Europe (in the section “What Red Law Does Not Write”) were also published. From the beginning of its existence, “Listy” focused on political processes with opponents of the regime, and after 1977 they regularly reported on Charter 77, published committee documents to defend those unfairly prosecuted, and also regularly reprinted articles from domestic samizdat. The magazine had many authors who contributed to its publishing. Many articles were signed with ciphers or pseudonyms, and cannot be identified even today.

Scriptum.cz acquired this unique collection directly from the hands of Dušan Havlíček, who was one of the authors of the “Listy” magazine and together with his wife for many years compiled a set of registers for this important title. Dušan Havlíček only provided his collection to scriptum.cz and it cannot be found anywhere else, either digitally or in print.