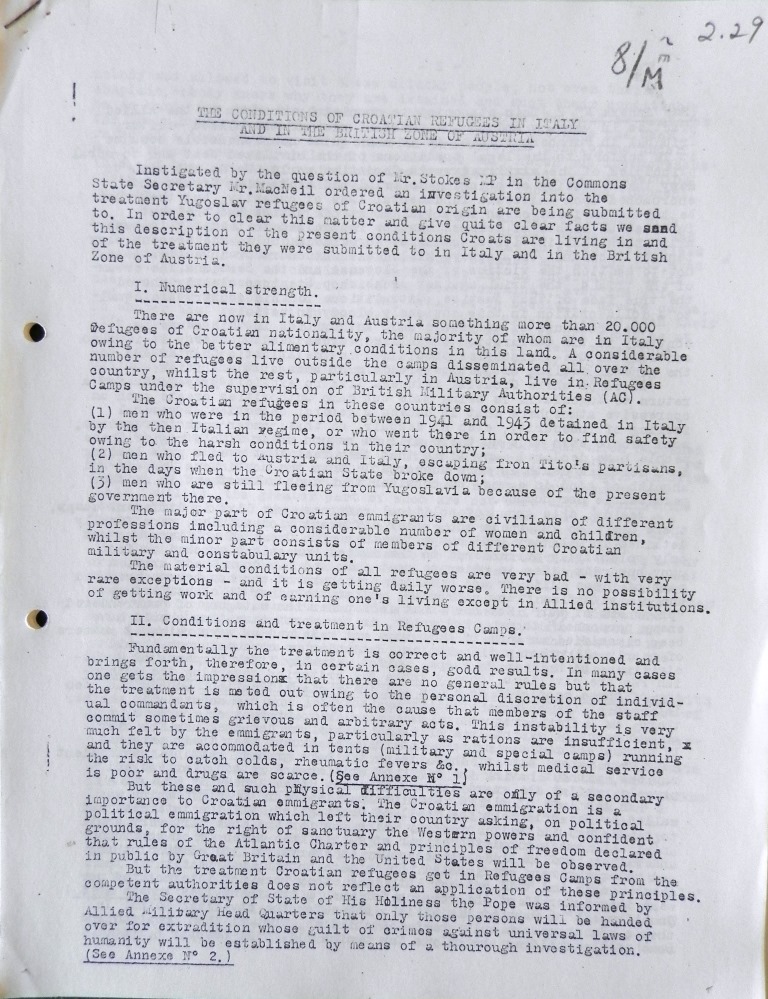 This document provides information on the status of Croatian refugees in Italy and the British zone of Austria after World War II. It is an unsigned document most likely drafted by the British Military Administration in Austria, probably in late 1946. It includes numerical estimates of refugees (20,000 Croatian refugees) in refugee and POW camps, as well as the testimonies about conditions and treatment in the camps and the information on the extradition of refugees to Yugoslavia.

These refugees fled from the units of the Yugoslav Army and managed to cross the Yugoslav-Austrian border and settle in Allied camps in Austria and Italy. The incentive for writing this document came from the Commons State Security.

Most of these refugees were civilians, including women and children. The British report shows the poor condition in which these refugees lived and their greatest fear - extradition to the new Yugoslav state.

Allied military headquarters informed the Secretary of State of the Holy See that in the future only those people whose guilt for crimes against humanity is determined after an in-depth investigation will be extradited to Yugoslavia.

The report has five appendices. These are four excerpts from letters written by Croatian prisoners in which they speak about their mistreatment at the hands of the Allied authorities. There is also the letter from the Secretary of State of the Holy See Giovanni Battista Montini (Pope Paul VI) on 17 May 1946 (Annex no. 2) addressed to an unknown person in the church, wherein he reflects about the criteria on which the Allied forces extradited Croatian prisoners to the Yugoslav authorities.

Krunoslav Draganović was almost in daily contact with these prisoners, and from them he collected valuable information and testimonies. This document collected by K. Draganović is valuable because Croatian historiography does not have much data on these events (Grahek Ravančić, 2014, 283-284).

The document is located in the file folder no. 1, under the designation no. 2.29. The use of the material is limited because it contains personal data that is subject to the provisions of the Personal Data Protection Act (Narodne novine 106/2012). Unrestricted access to them may be granted to a direct descendant of the person whose data are contained in a document. Others have limitations:- either 70 years must pass since the  creation of the document or 100 years since the birth of the person to whom the document pertains.