Müller, Herta. Cristina and her dummy. What is (not) written in the Securitate’s files. Göttingen: Wallstein, 2009. Book 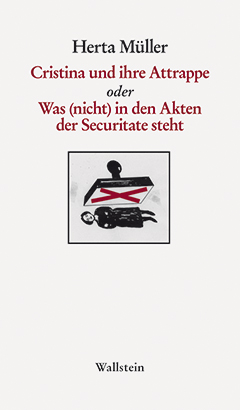 Herta Müller’s book Cristina und ihre Attrappe oder Was (nicht) in den Akten der Securitate steht (Cristina and her dummy: What is (not) written in the Securitate’s files) was published in 2009. The book contains her thoughts regarding the informative file that the Securitate created against her name in 1983. “Cristina,” as Herta Müller was code-named by the Securitate, came to the unwanted attention of Romanian secret police because her literary works allegedly distorted “the social-economic realities (…) especially in rural areas” and misrepresented and sometimes openly mocked the local state and Party authorities. After introducing the foreign reader to the legal and political constraints that for ten years prevented her from reading the file created on her by the Romanian secret police, Herta Müller underlines that the documents included in her three-volume informative file do not capture all the facets of the surveillance organised by the Securitate against her. Moreover, some of the abuses committed against her by its officials, such as bullying, beatings, or home violations are not even mentioned in her file. Using as a starting point the content of her informative file, Herta Müller engages in a discussion at length about the persecutions she was subjected to by the Securitate and how these episodes were reflected or not even mentioned in the documents it created. She describes how her problems with the Romanian secret police began at the end of the 1970s when, while working as a German-language translator at a factory in Timișoara, she turned down the Securitate’s proposal to become its informer. As a result of her refusal she was fired and the Romanian secret police continued to harass her and prevented her from finding a job. None of these events left traces in her file. Herta Müller also approaches the topic of her direct surveillance by the Securitate prior to and after the publication of her first book Niederungen (Nadirs) at a publishing house in West Berlin in 1984 and how the Securitate supplemented their physical abuse against her with psychological abuse. Again she underlines the fact that the documents in her informative file mention none of these episodes. Also omitted from her Securitate file are other events that could be used as incriminating evidence against Securitate officials, such as the beating of a German journalist who tried but failed to visit her, the death of one of her close friends, the organisation of their surveillance of her while she was abroad, etc. Herta Müller also expresses her anger at the Securitate’s violation of her private life through the installation of microphones in her house (even in the bedroom) and her mixed feelings about the recruitment of some of her friends as sources and informers of the Romanian secret police.

Müller, Herta. 2009. Cristina und ihre Attrappe oder Was (nicht) in den Akten der Securitate steht.  (Cristina and her dummy: What is (not) written in the Securitate’s files). Göttingen: Wallstein.