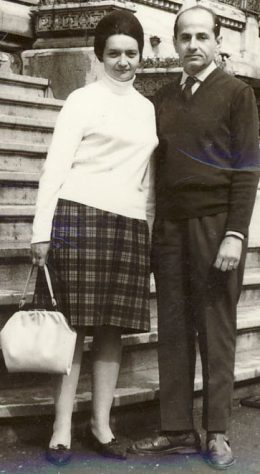 Aristina Pop-Săileanu (born 13 May 1931 in Lăpușul Românesc, Maramureș county) is one of the most important figures of the resistance organised in the mountains of Maramureş after the seizure of power by the communist regime. Her father, Nicolae Pop, was a forester, and thus knew the local mountains well. Her family lived in a village in north-west Transylvania, which came under Hungarian administration during the Second World War, as a result of which, after the occupation of Hungary by Nazi Germany in 1944, the population of Jewish origin was deported to concentration camps. Among those deported from Maramureş was Elie Wiesel, a figure who later became a famous example of tenacity in bearing witness to the sufferings undergone and in punishing those guilty of crimes against humanity. Aristina’s family were among those who hid Jewish families, saving them from deportation: in recognition of this, both she and her father have been accorded the distinction of Righteous Among the Nations. According to her assessment, this action was far less risky than that of hiding anticommunist partisans later, because the German soldiers and Hungarian gendarmes did not scour the mountains and forests in search of fugitives, as the Securitate were to do.

Aristina joined the anticommunist resistance groups in the Ţibleş Mountains in Maramureş at the age of eighteen, due to the fact that her family had aroused the suspicions of the Securitate by hiding three people who were sought by the communist secret police. Her father, Nicolae Pop, refused to betray the three fugitives and so was forced to hide in the mountains, where he organised and led a group of partisans for four years, until March 1953. Aristina and her brother Achim joined this group. The survival of the group in the Ţibleş Mountains was possible only thanks to the solidarity of people in the area, who not only did not betray them to the Securitate troops, but helped them with food and medicines. In this connection, Aristina Pop-Săileanu recalls: “Hunger, we in the mountains didn’t suffer. I may say that, in the mountains, we had what perhaps the richest person in the district didn’t have. Everyone brought us the best of what they had. They were extraordinary Romanians.” Her father decided to turn himself in after he fell ill and became partially paralysed. Left by the roadside near the village of Poiana Botizii, Nicolae Pop was immediately arrested, taken to a police station, then passed on to the Securitate, and brutally beaten until he died a few days later. To this day it is not known where he was buried. A week after he had been caught, on 8 March 1953, Aristina and her brother were surrounded and captured by the Securitate troops. At the age of twenty-two, she was sentenced after a summary trial to twenty years of hard labour on the grounds that she had been active “in a counter-revolutionary organisation.”

It was only thanks to her youth that she managed to survive the prison experience, despite extremely adverse conditions and falling ill with tuberculosis. Having passed through the prisons of Văcărești, Jilava, and Miercurea Ciuc, she was released eleven years after her arrest, in 1964, with the amnesty of all political prisoners in Romania. It is interesting to note her destiny after her release. Her brother Achim, who died shortly after his release and whom Aristina never met again after they were arrested, talked about his extraordinary sister to a cellmate, Nicolae Săileanu, who was also a political prisoner. His stories made Nicolae Săileanu fall in love with Aristina Pop without ever meeting her, wait till she too was released in order to meet her, and marry her shortly after. This beautiful story of love fulfilled on release from prison has a reverse side: the true terror began for Aristina Pop after her release, when she discovered that society had changed so profoundly that she could hardly trust anyone any more: “All the time I lived like that, in fear – a fear I had not had in prison. I don’t know if you understand me, but I was freer in prison, because there I thought and said what I wanted, but after 1964 we could no longer do that…” Thus Aristina Pop-Săileanu describes with sadness her post-prison experience.