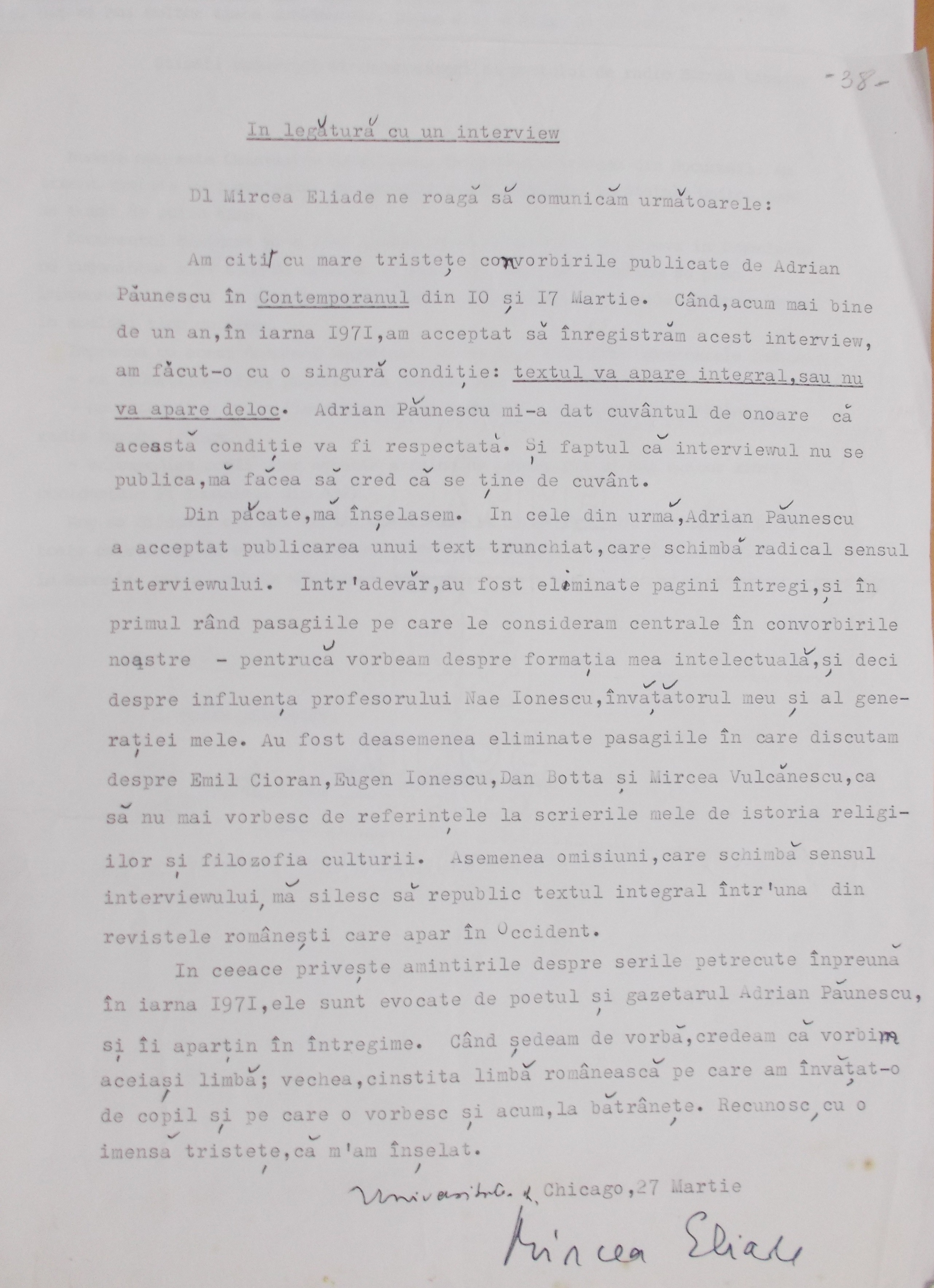 Monica Lovinescu and Virgil Ierunca had an intense correspondence with Romanian intellectuals in exile and a part of this correspondence is preserved in the collection housed by the National Archives in Bucharest. Among the letters preserved here there is one signed by the well-known historian of religions, Mircea Eliade. Eliade left Romania in 1940 and dedicated his entire intellectual activity in exile to the study of history of religions and the history and philosophy of culture.

In his letter of 27 March 1971, which was read by Monica Lovinescu in her broadcast on RFE under the suggestive title of Refutation, Mircea Eliade speaks about the interview he granted to Adrian Păunescu and published in the Romanian magazine Contemporanul (The contemporary) on 10 and 17 March 1971. The historian of religion underlines the fact that he agreed to answer Păunescu’s questions on condition that the interview would be published in full. To his unpleasant surprise, the conversation was drastically censored and according to Eliade, the cuts dramatically altered the meaning of the interview. Specifically, the Romanian censorship removed those parts in which Eliade mentioned autobiographical details connected to his youth in interwar Romania, such as the impact that Nae Ionescu, a very influential right-wing-oriented journalist and professor of philosophy, had on his intellectual development. Also, the names of other renowned Romanian exiles such as Emil Cioran and Eugène Ionesco were removed, as was any reference to his co-generationist, Mircea Vulcănescu, who ended his life in a communist prison. Finally, any mention of his writings about the history of religion and philosophy of culture, which were central in Eliade’s work, were absent from the published interview. Consequently, Eliade bitterly concluded that: "As for the memories of the nights spent together in the winter of 1971, they are evoked by the poet and journalist Adrian Păunescu and belong to him entirely. When we were talking, I thought we were speaking the same language: the old, honest Romanian language that I learned in my childhood and which I am still speaking now, in my old age. I admit with immense sadness that I was wrong."

The censorship of the interview can be easily understood if one considers the political and cultural context in Romania at the beginning of the 1970s. The nationalist turn of the Ceaușescu regime (Petrescu 2009, 523–544) did not result in the rehabilitation of Nae Ionescu, Emil Cioran, Eugène Ionesco, or Mircea Vulcănescu whose names were still on the list of the Romanian censorship. Moreover, the ending of the liberalisation period, marked by the so-called Theses of July 1971 on improving political-ideological education, made even more problematic the publishing of any reference to religion and history of religions. The paradox that Mircea Eliade accepted an interview with Adrian Păunescu only on the basis of the latter’s assurance that the text was going to be published uncensored in Romania can be understood if one takes into consideration the situation of the two protagonists involved. Since Mircea Eliade left Romania in 1940, he had lost touch with what was really going on in the country, and he seems to have been unaware about what censorship really meant and how it actually worked.  As for Adrian Păunescu, at that time a young man of only twenty-eight and without any obvious connection with the communist regime, he had come to the United States at the invitation of several Romanian writers. Enticed by the young poet’s genuine interest in his person and work, Mircea Eliade not only agreed to grant him an interview, but also answered wholeheartedly the provocative questions asked by Adrian Păunescu, at that time a promising and uncommitted young writer (Manolescu 2014).