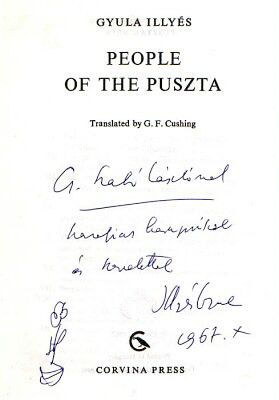 László Cs. Szabó had many friends among Hungarian writers and poets before and after his emigration (1949). He had great appreciation of Gyula Illyés, one of the most important writers of Hungarian literature of the twentieth century. In 1967, Illyés dedicated his famous book’s English translation, the People of the Puszta, to Cs. Szabó (the book was published in Hungarian in 1936). This book is one of the most important works of Illyés, an exact sociography and also an autobiography. In this work, Illyés memorialized the peasants of the Mezőföld region, which was his social layer. In the sociography, he could simultaneously present the misery and humanity of the poor.