The Theatre of the Eighth Day Teatr Ósmego Dnia 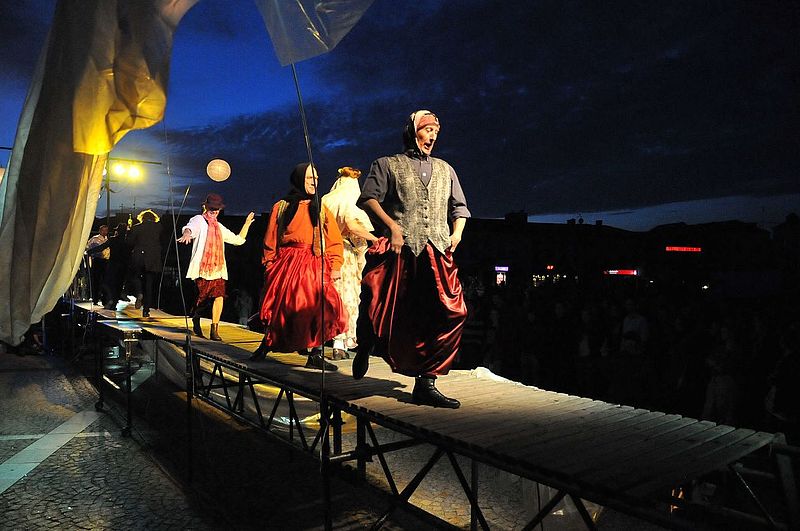 The Theatre of the Eighth Day is one of the best known Polish theatre groups. Its roots can be traced to the student counterculture movement of the 1960s. It was firstly animated by the group of students from the Polish Studies at Adam Mickiewicz University in Poznań. The name of the group „Student Poetry Theatre The Eighth Day” derives its meaning from the play Green Goose Theatre written by Konstanty Ildefons Gałczyński, Polish poet from the interwar period (1918-1939).

What was particular about the Theatre of the Eighth Day, is the cosy atmosphere and very strong personal ties among the members of the group. For them, “The Eights” were not only an artistic milieu and a performance team, but also the life style and the community of people with similar political views. They underlined the communitarian value of the Theatre, as well as the shared responsibility for their work, actions and colleagues. The main artistic inspiration for the Theatre of the Eighth Day, were the activities of Jerzy Grotowski, Polish modern theatre director and theorist. The events of the so-called March 1968 in Poland (anti-regime protests and anti-semitic backlash from the communist party) greatly influenced the work of the Theatre.

During the years, over 100 people worked and cooperated with the Theatre. The first leader of the group was Tomasz Szymański. The crew often used Polish and world literature for reference and inspiration, including Stefan Żeromski (Polish modern writer from the turn of 20th century), Julian Tuwim (Polish poet from the interwar period), Fyodor Dostoyevsky, Albert Camus, Anna Akhmatova, Osip Mandelstam or Francois Villon.

In 1968 Lech Raczak became the artistic director of the theatre. First play under his guidance was entitled Introduction to…(1970) and ridiculed the cult of Lenin, showing the hypocrisy of communist society.

In 1971 the Theatre showed the play In one breath, which openly referred to the events of March 1968 and December 1970 (workers’ protests and brutal response from authorities). The group was also inspired by the poetry of Stanisław Barańczak (poet and translator from Poznań). This play was also presented with success in Great Britain and Nederland.

In the beginning of the 1970s, the group started to use more spectacular artistic forms and opened itself to new audiences. They organized open air shows, e.g. The Integration (1972), coproduced with the group „Od nowa” [Anew] and jazzmen from „Laboratorium” band. The theatre group also changed its composition – in 1973 new people joined the Theatre, with only Lech Raczak left from the founding team. The first play of the new “Eights” was Inspection of a crime scene, based on several works by Albert Camus. In 1975 the Theatre of the Eighth Day used Dostoyevky’s Brothers Karamazov to create the play We must confine ourselves to an earthly paradise, since that’s what they call it…?.

The Theatre of the Eighth Day had a clear vision of an actor as a revolutionist and a rebel. The members of the group underlined the necessity of constant action, self-awareness and self-improvement. This led to courageously taking a political stand and expressing political views. In 1976 members of the Theatre signed an open letter against the changes in the Polish constitution and supported Workers’ Defence Committee (KOR), a democratic opposition group of intelligentsia aiding oppressed workers. This adamant political attitude of course resulted in repressions from the communist authorities: members of “The Eights” were arrested, interrogated and searched. They were denied passports, couldn’t leave the country or perform in public institutions, their professional careers were undermined.

Especially in the 1970s and the 1980s the performances of „The Eights” were censored and denied access to public scenes on everyday basis. There was also a press ban on writing anything positive about the Theater of the Eighth Day in the press – mentioning their international success or new plays was not allowed. Plays performed in the late 1970s - Sale for everybody (1977) and Oh, have we lived in dignity (1979) - are regarded as the most important performances in the Polish alternative theatre of that period.

Shortly after that, in 1979, the group was acknowledged by state institutions as a professional theatre.

However, the introduction of the martial law in Poland (1981) hindered all activities of “The Eights” – repressions took new forms and intensity. From 1982 to 1984 The Theatre of the Eighth Day was not allowed to visit international theatre festivals it was invited to attend, in Italy, Spain, Denmark, Sweden and Switzerland. In 1984 the authorities of the Polish Ministry of Culture and local authorities of the city of Poznań banned the Theater of the Eighth Day from performing publicly, confiscated their facilities and withheld financial donations. In this situation, the Theatre was forced to perform mainly in churches.

Against all odds, the group was striving to function. They produced the play A fablebased on William Faulkner (1982), Ascent (1982) and shows: Report from a city under siege (1983), Miracles and Meat (1984) and Wormwood (1985). However, constant instability and repressions forced members of the group to emigrate. Not all of them received the passports they applied for, which most probably was a deliberate move of the authorities in order to divide the artistic milieu. The split group worked simultaneously in Poland (where it realized The small apocalypse) and in Western Europe (play Auto-da-fe). In the following years, most of the members of “The Eights” managed to move to Italian Ferrara and continued working together. Among the performances realized in Western Europe were If, on a certain day, in a happy town… (1986) and Meat (1989).

After 1989, “The Eights” returned to their hometown – Poznań. In 1991 they showed the first play after their return No man’s land. Two years later, an open air show Sabatwas staged in Poznań. In 1994 Lech Raczak was replaced by Ewa Wójciak as the director of the Theatre of the Eighth Day.
In the new, post-socialist reality, the poetics of rebellion and counterculture were less appealing to the audience. However, the Theatre tries to continue their mode of living and performing even in changed social conditions. They educate and raise new generations of artists, organize artistic events and participate in international theatre festivals.