The Fine Art Fund was established in 1952, on the basis of the Soviet model, as the centralized organisation of the visual artists. In 1968 it was fused with the Literary Fund and the Music Fund, and the Art Fund of the People’s Republic of Hungary came into being as the central employer of all Hungarian artists (artists had to be employed in order to avoid being labelled “social parasites,” since it was a crime not to have a workplace). The mission of the Art Fund was to serve as an advocate for artists provide social benefits and pensions, and run collective studios and creative houses. Between 1972 and 1983, it oversaw the operations of companies as well (in publishing, art material production, and gallery life).

This atypical organization was socialized in 1983, and it payed taxes to the central budget. Until 1988, it also contributed to the budgets of some art institutions and to the yearly acquisition of works of art. In 1992, after the change of regimes, the Hungarian Art Foundation (MAK) took over the handling and maintenance of the properties and tasks. Since 2011, it has functioned as the Hungarian Art Nonprofit Ltd. (MANK), with a partly reinvented mission as a provider and property manager under the supervision of the Ministry of Human Resources (EMMI).
lasīt vairāk 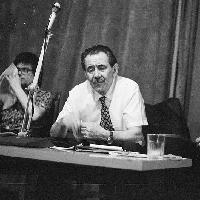 Lively political discussions took place within the Közgáz-klub at the Karl Marx University of Economic Sciences (Marx Károly Közgazdaságtudományi Egyetem, or MKKE). These discussions occurred mainly as part of the so-called Polvax. The organizers of these discussions were current and former students who wanted to provide an opportunity for the free expression of different views in the era of soft dictatorship during the 1970s and 1980s. They attempted to create an independent organization for university students to serve as an alternative to the Hungarian Communist Youth League (Magyar Kommunista Ifjúsági Szövetség, or KISZ).

As a result of the student movements in Paris in 1968, alternative notions extending beyond the central ideology and ideas opposing the communist system appeared at universities in Hungary as well. The dissatisfied students wanted open debate and true advocacy rather than the meetings of the Hungarian Young Communist League that lacked genuine content. The various university clubs that existed at this time served as the venues for these discussions.

Club life at the Közgáz-klub became very active in 1976, when Gyula Jobbágy, an assistant lecturer at the Department of Scientific Socialism and former student, became the leader of the club. Social life at the university was very intense and eventful and included the organization of film and jazz clubs, concerts, festivals, and political discussions. The Közgáz-klub edited its own bulletin entitled Klub Közlöny. The tone of articles that appeared in this publication was more critical than those published in the official newspaper of the Karl Marx University of Economic Sciences. Furthermore, some of the students formed a rock band called Neoprimitív. This band was known for rewriting the lyrics of hit songs in order to imbue them with provocative sexual and political content. According to the organizers, many thousands of students attended Közgáz-klub events every month, thus generating admission revenue that provided the club with a larger budget than the university chapter of the Hungarian Communist Youth League (KISZ).

Polvax was the most popular program associated with the club. Polvax operated between 1976 and 1984 as the first political debate club at the university. László Szentirmay, one of the organizers of the Polvax, said in an interview in 2004 that he and his associates had managed to establish “the most exciting political club during the era of soft socialism.” Political leaders such as György Aczél, Károly Grósz, János Berecz, Gyula Horn, Imre Pozsgay, and Rezső Nyers held lectures as part of the debate club. Critical opposition figures were invited to speak at club meetings in addition to dedicated communist party and state leaders. The communist leadership of the university regarded Polvax as the meeting place of dissident students and compared it to the debate circles that had emerged at the time of the 1956 Hungarian Revolution. Polvax was banned on two occasions.

In addition to the club activity, there were attempts to reform the KISZ organizations, though these efforts were unsuccessful. Gyula Jobbágy felt that they had to find another way to represent their own interests. His idea was to establish an independent organization for the students. Therefore, the Meeting of Students from Universities and Colleges in Budapest (Budapesti Egyetemisták és Főiskolások Találkozója, or BEFŐT) was established in 1981. Informants had notified the political police about this plan.

Hungarian Communist Youth League leaders conducted control over meetings, limited and monitored commentary, and filled the audience with loyal KISZ members. They eventually made it impossible to hold events in their original form and the essence of the BEFŐT was lost. Posters bearing the name of the organization were banned because they were deemed “revolutionary.” The rector of the university threatened Gyula Jobbágy, charging him with having engaged in anti-state conspiracy. At the BEFŐT meeting held on 20 March 1981, the idea of an independent student forum appeared only in very faint form. The project had failed. Many students were disappointed because the meeting had been powerless. As a result of threats, Gyula Jobbágy did not speak at all.

Polvax restarted in 1983 as Poltár, but as a result of political censorship, the organizers were forced to abandon their original objectives. Since they did not want to proceed in this way, the Poltár was brought to an end the next year. However, the history of Polvax restarted in 2011, when László Szentirmay organized the “Poltár of the modern era.” Its profile did not change, thus remaining a forum for political debate and other topics associated with public life.
lasīt vairāk 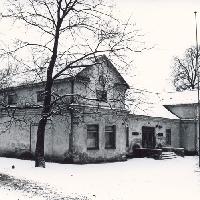 The Museum of the 1863 Rebellion is part of the Kėdainiai Regional Museum. The museum exhibits items that illustrate the history and life of the region, such as old handicrafts, the history of Kėdainiai, and its religious development (Kėdainiai was a centre for Evangelical Protestantism in Catholic-dominated Lithuania). Educational projects for schools are one of the most important activities of the Kėdainiai Regional Museum. 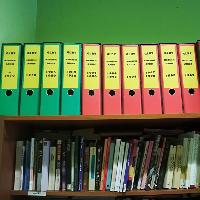 The Lesbian Section LL (later called ŠKUC LL) was founded in 1987, as part of ŠKUC-Forum, the main Slovenian non-profit student and youth cultural organization. ŠKUC (an acronym for Student Cultural and Artistic Centre/Študentski kulturno-umetniški center) cites as its inspiration and birthplace the 1968 student protests. The organization itself was officially founded in 1972, in Ljubljana. In the late 1970s and 1980s, ŠKUC became the central platform for promoting and supporting the alternative cultural scene and new artistic practices in Slovenia. The organization survived the dissolution of Yugoslavia and social and political transition, remaining loyal to its original goals and leftist politics. There are several programs and thematic sections currently active within ŠKUC, such as the Gallery, the Equal Opportunities Section, a publishing section, and the ŠKUC archives.

In the mid-1980s, ŠKUC welcomed lesbian and gay groups, and supported the 1984 Magnus Film Festival dedicated to homosexuality. Lilit, the first Yugoslav feminist lesbian group, was established in 1985, and two years later it became ŠKUC LL (LL referring to Lesbian Lilith), having remained an independent organization within the broader ŠKUC network to this very day. Together with the gay group Magnus, ŠKUC LL has organized round tables, direct actions, and parties, published bulletins and other materials (Lesbozine), spoke out publicly in the mainstream press and at feminist gatherings. When appealing to the authorities, Magnus and LL act jointly, mainly via public statements, letters and editorials. Their main demands were the integration of homosexuality into socialist society, and the constitutional ban on discrimination based on sexual orientation (Velikonja and Greif 2012). A lengthy article about lesbianism in the magazine Mladina, featured on the front cover, and bearing the title “We Love Women” (”Ljubimo ženske,” Mladina, no. 37, Oct. 30, 1987, Ljubljana) is considered one of ŠKUC LL’s most recognizable and successful actions. The Week of Lesbian Cinema was held in 1988, in the ŠKUC Gallery in the very heart of Ljubljana. By the end of the 1980s, lesbian activism became an integral part of new social movements and the lively alternative cultural and club scene in Slovenia, but it also began articulating political demands and promoting the social acceptance and normalization of homosexuality. Slovenian lesbian activists made contact and lasting friendships with lesbians from other Yugoslav cities, namely Zagreb and Belgrade, and encouraged them to organize themselves and speak out publicly. ŠKUC LL continued its activities after Slovenia gained independence, and during the 1990s, the organization became one of the most active LGBT groups in the country. In cooperation with Magnus, ŠKUC LL co-founded the Roza Klub group, maintained the tradition of film festivals, published the gay and lesbian magazine Revolver, organized parties in the K4 club, fought homophobia and promoted LGBT rights and the values of an open society with equal opportunities.

At the end of 1990s, ŠKUC LL turned to sexuality and gender studies, in particular LGBT and queer theory, history and literature. The group publishes books, edited volumes and articles, for instance in special issues of Časopis za kritiko znanosti, and cooperates with academics at the University of Ljubljana. In the last 20 years, more than 30 books have been published as part of the Vizibilija series (a part of ŠKUC publishing). These consist of literature and non-fiction by Slovenian authors, and numerous translations of seminal works in gay and lesbian studies. On May 1, 2001, ŠKUC LL opened the Lesbian Library and Archive. In December 2000, preceding the establishment of the Library, a comprehensive bibliography of books and other LGBT-related writings in the Slovenian language was completed and published (Izbrana bibliografija, 2000). The Library contains mainly of foreign literary, theoretical, scientific and other writings, and a collection of newspapers and magazines. The Archive collection is focused on Slovenian materials and covers the period from the 1970s onwards. The Library’s catalogue is available online at: http://www.ljudmila.org/lesbo/knjiznica.htm.