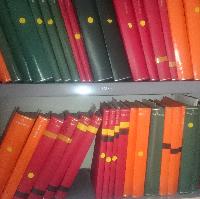 A small group of devoted researchers began to do interviews in 1981 with people who had been active in the 1956 Hungarian Revolution. The aim of people who did the interviews was to reveal, by giving people chances to share personal memories, the real story of this decisive set of events, which were taboo under the Kádár regime, which had violently suppressed the revolution and which was eager to make up for its lack legitimacy in the eyes of the population by spreading false propaganda. These early interviews later served as the core collection of the Oral History Archives, which was founded in Budapest in 1985.