Horvat, Vlatka. The students of the 4K grade at Norijada in Zagreb, May 1989. Photo 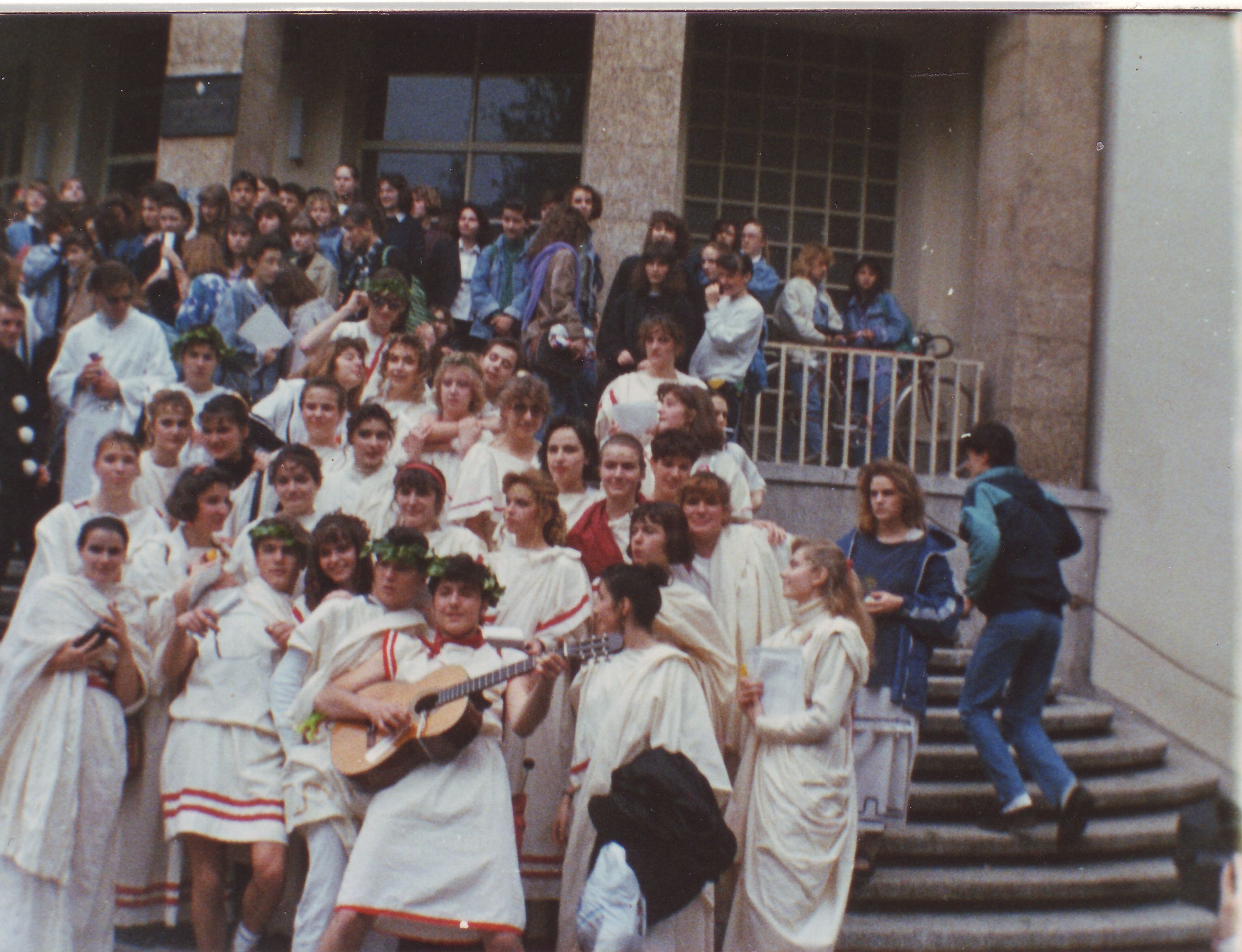 Norijada is the colloquial name of the celebration day for Zagreb secondary school students, which usually falls on the May 30. On that day, seniors from all around Zagreb are officially entitled to mark the end of their schooling, and "go crazy" (noriti or ludovati) for the last time before setting out for more serious business, preparation for graduation and university studies. Anthropologically speaking, it was a kind of a rite of passage toward adulthood. This ritual ­­– most probably originating in the post-war period – in the classics program secondary school in the late 1980s was especially colourful because the students would wear ancient Roman costumes in order to highlight the orientation of the school. These were typically white togas for boys and luxurious white long dresses for girls. One also had to pay attention to authentic hairstyles and jewellery, because it significantly contributed to the overall impression. On this occasion the school students would act out rather loudly and colourfully.

The standard activities generally transpired as follows: first, the students would gather on the main staircase of their school, and begin singing songs that usually describe different (bad) traits of their teachers, who had to remain quiet for the sake of peace. The ties with their student status were visibly broken, and equality with the adult world, which allowed some degree of criticism, was perhaps the inherent meaning of this procedure. At the end of this event, one of the students, usually the funniest, would read the ‘last testament’ of the departing generation to the younger ones. The testament usually consisted of the ten commandments, which reversed the house rules of the school (for instance, “Never greet a teacher when one passes by or near you,” etc.). The first part of separation was thus finished, and the students would finally leave the school. They went out to the streets to meet students from other schools and display solidarity with them. This was the moment when real Norijada began, and students officially announced their separation from their previous life. On that day the students were allowed to do anything (except commit crimes). They would wander around, or swim in the wishing well and other fountains, or tease chance passers-by. They would usually get dead drunk and smoke heavily, and everybody was invited to do so because everybody was supposed to feel the same way. Moreover, in order to leave some trace of their “crazy” generation, students usually wrote graffiti on walls, citing their class, school and the year of the Norijada.