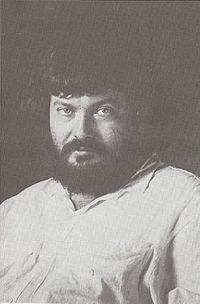 Like a red line, Ellenpontok divided Géza Szőcs’s life into two: before and after 1982. Choosing to remain in his home country, thus accepting the monitoring by the secret police that this entailed, without a job and facing existential problems, he continued his dissident activity. On 14 July 1984 in the spirit of the traditions established by Ellenpontok, he addressed a fourteen-page petition to the Central Committee of the Romanian Communist Party in which he advocated the minority rights of Hungarians, and – at that time he alone – of Germans. With the thirteenth Congress of the Party drawing near, which provided the opportunity for publishing guidelines regarding its nationality policy, Szőcs formulates his demands in ten points. In the first point he asks that the Romanian constitution should include not just personal, but also collective ethnic rights – considered a taboo subject even today –, lifting up his voice for the recognition of Hungarians and Germans living in Romania as independent ethnic-historical groups. In addition to the reestablishment of the Ministry of Nationalities which operated between 1944 and 1952, he asks for the elaboration and guarantee of a law on nationalities (ethnic minorities), in accordance with the Nationality Statute of 1945, still in force, the 1946 Nationality Draft Act of the Hungarian People’s Union and the Programme Proposal drawn-up by the editors of Ellenpontok. He asks for public debate with a view to restoring such administrative, institutional and cultural frameworks related to ethnic interests as the former Hungarian Autonomous Region, The Transylvanian Museum Society, the Union of Hungarian Writers in Romania, the Hungarian Music Conservatory in Cluj-Napoca, the network of Hungarian-language schools and the university providing Hungarian-medium education in Cluj-Napoca, etc. He requests the making public of the unification document of the Cluj-based universities, dating from 1959, which stipulated as a principle for the future an obligatory minimum number of Hungarian students and teaching staff as well as the educational framework. He raises the issue of examining subjects such as Hungarian-language film production in Romania, or the extension of the one-hour Hungarian-language television broadcast. The fifth point of the petition is especially daring, since it encourages the compilation and disclosure of lists of Hungarians and Germans living in Romania. Moreover, Szőcs argues in favour of the disclosure of social and economic statistical data concerning the various nationalities. As far as education is concerned, he asks for disclosure of the number and proportion of Hungarian and German university graduates in the period 1945 to 1984, and, in the context of the last 10 years, a full l list of graduates who were declared to be Hungarians or Germans, broken down by higher education institutions. He also asks for the disclosure of statistics regarding secondary schools, by counties and cities. In the seventh point of the petition he asks for the Romanian Communist Party to publicly take a position against the practice of the press which, wrapped in the appearance of semi-officialdom, left room in periodicals or other publications for nationalistic and anti-Semitic manifestations, presenting the historical role of nationalities, especially that of the Hungarian minority, in a one-sided and distorted manner. Szőcs asks that the Party distance itself from the anti-minority policy of the interwar governments and render impossible the revival of this policy; as for preventing the falsification of history and malicious manipulation he sees the solution in the publication of a “White Book” which will contain all the significant documents – both political and cultural – pertaining to Romanian–Hungarian historical coexistence. Szőcs suggests that Romania should initiate at the United Nations the inclusion of an article in the Universal Declaration of Human Rights which will explicitly address minority rights, and also bring up the topic of supplementing the convention regarding genocide to include cultural genocide and, ethnocide, including an article about the elaboration of guarantees for rendering this impossible. In support of his requests and suggestions, Szőcs supplies primarily historical data, organised into points A, B, C, D and E. A part of the nationality-related requests touched upon by Szőcs in the spirit of constitutionality, compliance with Lenin’s ethnic principles and democratic freedom of opinion were already included also in the programme proposal of Ellenpontok in one form or another. He justifies his petition by arguing that the “current solution” of the nationality issue does not, for the time being, put an end to the flux of Hungarian and German masses determined to leave the country. “Except for those embracing assimilation,” Szőcs writes, “ethnic minorities at all times and in all places have wanted to enjoy equal rights not just as individuals but also as a group. This is why we demand not just personal rights – which can often prove to be rather vulnerable – but also collective ethnic rights.” “To conclude,” he writes, “I wish to express my appreciation to the Party leadership regarding the fact that they have abandoned the practice of retaliating against the formulation and expression of opinions different from the official point of view by immediately applying physical liquidation or long-term deprivation of liberty. I am fully aware of the fact that in the 1950s I would have had to pay with my freedom or life for similar activities, such as the publication of the illegal magazine entitled Ellenpontok – notwithstanding that this magazine did not attack the existing social order, had no agitating character and did not oppose the nationality policy of the party, either, but only practices and methods that are contrary to the declared principles of this policy.”

The petition of July 1984 remained without a reply. Nevertheless, Géza Szőcs continued to use this means to inform the Party leaders about the existence of primarily Hungarian minority claims. On 10 February 1985, Szőcs drew up his proposal regarding the establishment of a world alliance of minorities. “We apply to the UN with the proposal,” he wrote, “that it should lay the foundation of an institutional system under its auspices, the purpose of which is to represent in principle the interests of all the ethnic minorities in the world.” He concluded his proposal, extending over more than one page, with the following lines: “The ethnic minorities living in all parts of the world together represent an enormous majority against any majority taken separately. The Minority International conceived by us could function as a right hand extended as a sign of peace for this majority organised from minorities.” On 15 February 1985, after a personal visit paid by Szőcs, the writer and later emigrant Dorin Tudoran also signed up to the proposal, as did the economist and politician Károly Király on 27 March 1985. On 28 March 1985 Szőcs submitted another petition to the Central Committee of the Romanian Communist Party. In the sixth and last point of the petition which summed up the new developments, unwelcome from the ethnic point of view, of the months following the first petition, Szőcs asked the Romanian Party and state leadership to present and support at the UN the proposal for the creation of a minority world alliance signed by the three of them and attached to the petition. The service of the petition represented not only an organised action but also a Hungarian-Romanian joint demonstration. This proposal for a world alliance of minorities was presented also in Western countries, but no substantive reverberations resulted.

Molnár, János. 1993. Az Egyetlen: Az Ellenpontok és az ellenpontosok története (The only one: Counterpoints and the history of its founders). Szeged: Agapé.