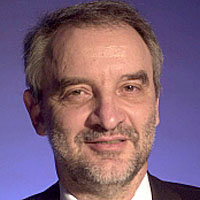 György Droppa (born 17 September 1947) is a Hungarian politician and economist. He studied at the Karl Marx University of Economics Sciences in Budapest, after which he started his career in the catering industry and in many hotels. In 1982, he opened his first restaurant (Fondue Bar) on Keleti Károly Street in Budapest, which became a popular meeting place for members of the “democratic opposition.” By 1988, he had established three other catering businesses (the Jókai Club, the Katlan Club, and the Virányos Club), where several opposition events took place. Droppa joined the Danube Circle (Duna Kör) in 1985. The Circle was a non-governmental organization in opposition to the government’s project to construct a River Barrage Dam near Nagymaros. In 1991, he became the deputy ambassador of the organization. He joined the Alliance of Free Democrats (SZDSZ) in 1989. He was a founding member of the reestablished Hungarian Catering Corporation. After the change of regimes, Droppa served as the leader of several extra-parliamentary political parties. In 1991, he became a member of the presidency of the Trade Corporation of the Hungarian Catering Industry. He also served as the Director of ISTER, the East European Environmental Research Foundation, between 1993 and 1997.