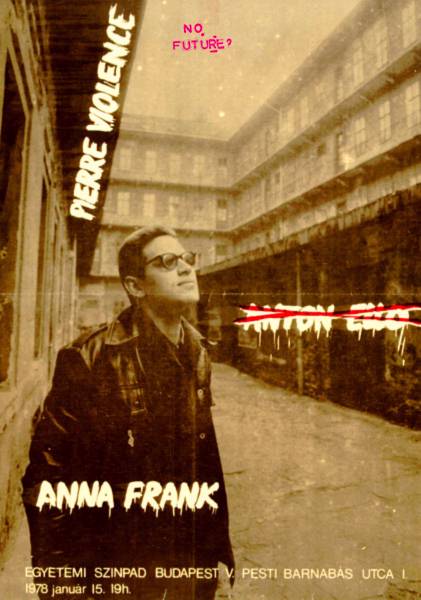 This offset poster represents a significant event both in the history of the Hungarian new wave and in Tamás Szőnyei’s personal story. This was the first item of Szőnyei’s collection. He received it as a present from his painter brother, György Szőnyei. The poster advertised an art-punk act by a certain “Anton Ello” and “Pierre Violence,” who are Gergely Molnár and Péter Hegedűs of the band Spions. They used pseudonyms and their band’s name, Donauer Video Familie (that eventually turned into the not less ironic Spions), was not displayed either. The potential audience would have had little clue of what to expect.

The event was entitled Anne Frank Memorial Evening, and the name Anne Frank appeared on the poster as well. One of the band’s songs was “Anne Frank’s Dream,” which is a violent apocalyptic vision: it is initially about a coercive sexual act with Anne Frank before the Nazis discover her. The text is also open to a variety of figural meanings, one being that the perpetrator is the totalitarian political power itself and listeners of the song are all Anne Franks whose best chance for gratification is to be assaulted before the quickly approaching death. “No future?”—the poster questioned with an homage to the Sex Pistols.

The band Spions had a huge impact on the new wave in Hungary, despite the fact that they could not release an album, and performed no more than two (!) times in Budapest and on one single occasion in the city of Pécs. The band grew out of a lecture series on the history of rock music that was held under the auspices of the Society for Dissemination of Scientific Knowledge (TIT), an institution of public education supervised by the Ministry of Culture. The lecturer was Gergely Molnár, who analyzed texts by Lou Reed, David Bowie, Roxy Music, and the Kraftwerk in an event at the Ganz-Mávag factory, House of Culture in April 1977. The opening and closing acts were songs performed by students of the Music Academy, Péter Hegedűs and György Kurtág Jr. Hegedűs approached Molnár to start a band, and they wrote a bunch of songs together. The event advertised on the poster was their first performance. It happened at the University Stage (Egyetemi Színpad) that was founded in September 1957 by the Loránd Eötvös University of Budapest. The Stage was one of the few official spaces where alternative performing acts and concerts could be held. The proto-Spions was the first art-punk band on this venue. The audience was small, but the songs had a greater impact than they ever imagined. These were formative experiences for such cult bands as Kontroll Csoport, Európa Kiadó, or URH, and their inspirational, witty songs were played throughout the 1980s.

The performance at the University Stage, however, was interrupted by the director of the venue, who went to the stage and explained that the concert had to be cancelled because of “technical reasons.” There is no clear evidence that the disruption was politically motivated, though witnesses say that it did sound bad. Nevertheless, it was made into a political issue by the artists when the next concert was advertised with a poster that used the image of the director of the University Stage interrupting the first performance. The poster contained another direct provocation to the officialdom of the regime. It featured the song “Ungvári Tamás” that bears the name of a famous public intellectual of the Kádár regime as its title. Ungvári was notorious for committing large numbers of factual mistakes in his works, which was noticed by many at the time; but this alone, perhaps, would not have provoked Molnár to devote an entire song to him. But Ungvári also aspired to write on popular music and counterculture with no fewer mistakes: fans, for instance, counted over 3,000 factual mistakes in his bestselling book on The Beatles. Such things, and Ungvári’s antipathy towards the alternative scene, inspired the lines by the Spions: “you mixed up, Tamás / Lennon with Lenin, Tamás / alliteration, Tamás / not politika, Tamás / but poetica, Tamás.”

The Spions provoked the interest of the political police, and there is extensive reporting on Molnár and his circle’s activities in the Historical Archives of the State Security Services (ÁBTL). For instance, Molnár’s private English teacher regularly informed on him, and the agent was instructed to provide a lot of homework for the musician in order to keep him busy and prevent him from “subverting” the system. Extensive practice of verb conjugation paid off well for Molnár: he emigrated to Canada in 1978 and never looked back. Hegedűs also left Hungary, coming back only after the regime change. The memory of the short-lived Spions and their songs, however, remained in the country and inspired an entire generation of new wave artists.