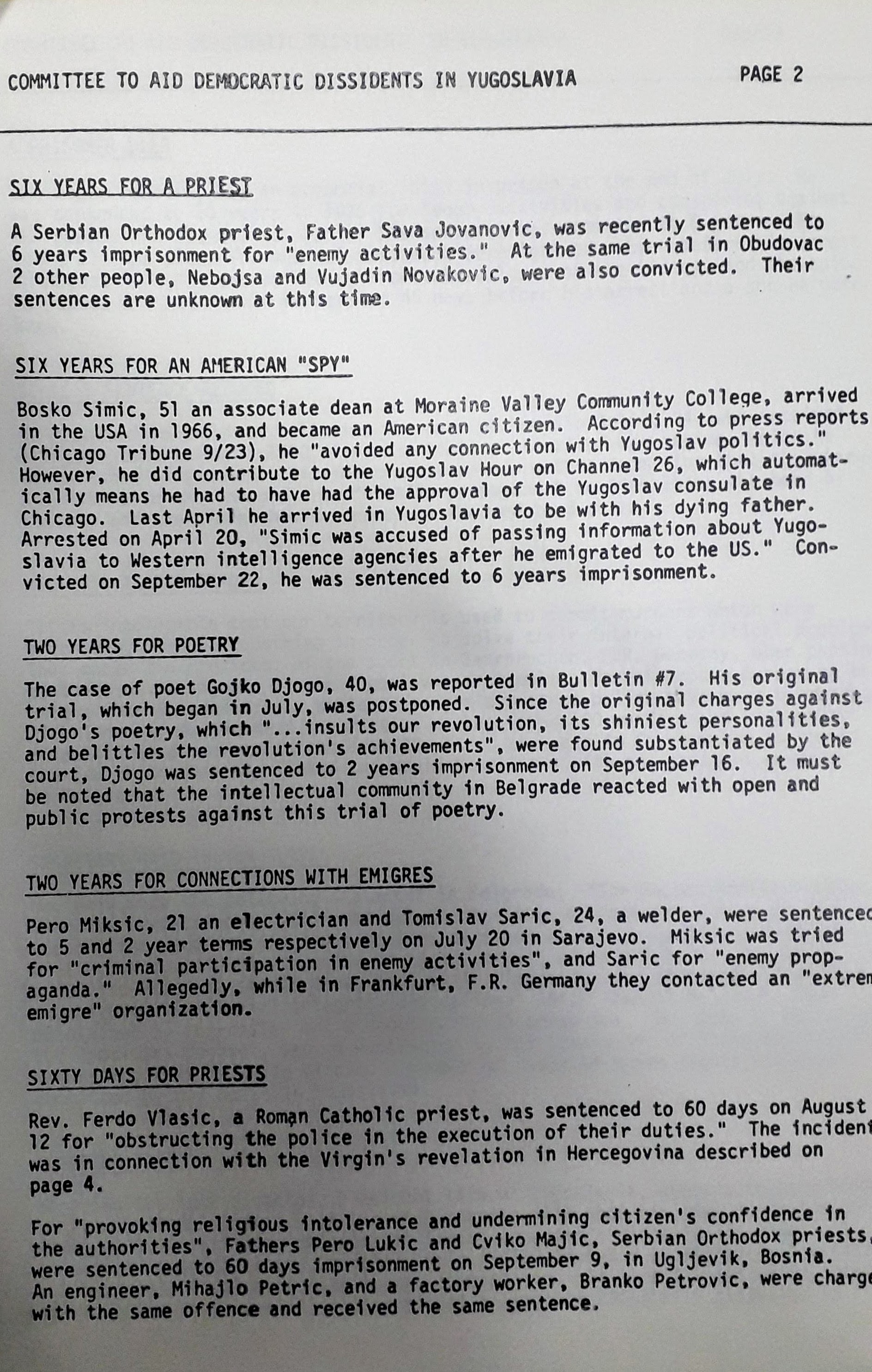 This featured item shows the typical content of C.A.D.D.Y. bulletin issues. As can be seen on page 2 of C.A.D.D.Y. Bulletin no. 8 (1981), they contain short texts (only one paragraph long) written in a concise manner. The text typically discussed news about various judicial sentences given to Yugoslav dissidents of diverse social strata (priests, workers, a poet, a college dean). The most interesting is the text “Two Years for Poetry” about the famous case of the poet Gojko Đogo, which helped lead to the formation of the intellectual opposition in Belgrade first driven to defend artistic freedom: “It must be noted that the intellectual community in Belgrade reacted with open and public protests against this trial of poetry” (C.A.D.D.Y. Bulletin, 8: 2).

Gojko Đogo was sentenced to two years’ imprisonment for publishing a collection of poems entitled Vunena vremena [Woollen Times] in which he “metaphorically alluded to Tito’s rule as one of tyranny, indolence and ignorance” (Dragović-Soso 2002, 54). It was the first time that “poetry was being tried” and thus support for Đogo was considered to be a principled defence of the freedom of literary and artistic creation and brought together intellectuals from across the political spectrum (nationalists, the “New Left”, and liberals).

The Đogo case was significant in that it led to the first institutional base of intellectual activism since the crackdowns of the early 1970s. This is reflected in the formation of the Committee for the Protection of Artistic Freedom at the Association of Serbian Writers in May 1982.

In the first two years of its work, the Committee raised its voice against Đogo’s persecution and imprisonment, the ban of the book Slučaj Đogo – dokumenti [The Case of Đogo - Documents] by Dragan Antić, the ban of the play Golubnjača in Novi Sad, the broadcast Beograde, dobro jutro [Belgrade, Good Morning] by Dušan Radović, the ban of Ljubomir Simović’s collection of poems Istočnice, the sentencing to seven months’ imprisonment of the Dubrovnik poet Milan Milišić, the closure of the Zapis publishing house, the ban on the regular publication of the newspaper Književne novine, the ban of Nebojša Popov’s book Društveni sukobi – izazov sociologiji [Social Conflicts: A Challenge to Sociology], the illegal detention of the writer Borislav Pekić in Belgrade, the ban of Aleksandar Popović’s play Mrešćenje šarana [The Spawn of the Carp] in Pirot, and the ban of Živojin Pavlović’s book Ispljuvak pun krvi [Spit Full of Blood], among others (Kljakić 2015).