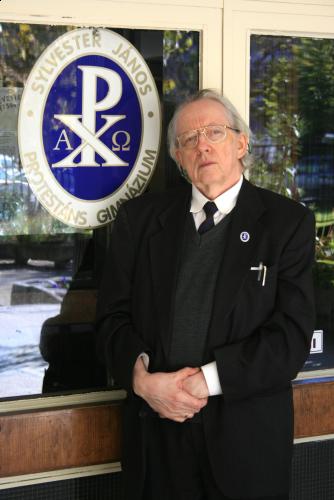 Art historian and educator István Bibó Jr. was born in Budapest in 1941. His father, István Bibó, at the time worked as an officer in the Ministry of Justice. His mother, Boriska Ravasz, daughter of a Calvinist Reformed Church bishop, was a teacher at the Baár-Madas grammar school in Budapest.

Bibó belonged to the generation that was born during World War II, witnessed the 1956 Hungarian revolution and the reprisals as teenagers, had reached adulthood by the time the Kádár regime launched its program of consolidation, and was most intellectually active and creative at a time when the system of state socialism was beginning to dissolve, demoralizing much of the society. These experiences (especially those of 1956–1957), had a profound influence on his later life too, all the more since his father, a member of Imre Nagy’s revolutionary government, was the last person to remain at his post after the Soviet military invasion, for which he later had to spend years in prison, separated from his family.

István Bibó Jr. completed his final grammar school exam in 1959 at a Budapest school named after prince Ferenc II Rákóczi. Although he had done very well in school, he was not allowed to enter an institution of higher education, since his father was still in prison, serving a life sentence. He worked as an unskilled laborer for two years in the Aquincum Ceramic Factory. He then reapplied for admission to university and was successful. In 1961, he began his studies at the Eötvös Loránd University, Budapest, and in 1966, he completed his MA in Art History and Hungarian Language and Literature. By the end of his studies, he had married Judit Lipcsey, a secondary school teacher of the French and German Languages and Literatures. They later had four sons.

With the support of art historian professor Anna Zádor, Bibó Jr. managed to get a job in the last year of his studies at the Monument Building Department of the Budapest I District Real Estate Maintenance Company. He was responsible for doing historical research and documenting monument buildings in the Buda castle district that needed special expertise before being restored or renovated. In 1980, he began to work at the Art Historical Research Institute of the Hungarian Academy of Sciences, where he continued pursuing research on and documenting monument buildings for another ten years. In 1985–1986, together with his wife Judit he initiated a citizens’ movement to reclaim from the state “Baár-Madas,” a once flourishing Reformed Church secondary school in Budapest which had been “nationalized” or, rather, confiscated in 1952 by the Communist state, together with dozens of other traditional church schools in the country, which had been built and maintained by different nominations and monastic orders. Reactions among Church leaders were quite ambivalent. Although they did not oppose the initiative, they seemed cautious and tried to slow down the movement in order to avoid provoking the authorities. By the turn of 1988–1989, encouraged by the winds of major political changes, they urged that the necessary preparations be made for the change in status. The building of Baár-Madas was given back to the church, and the voluntary teaching staff, led by István Bibó, was assigned to renew the educational program of the once famous Reformed Church school.

István Bibó Jr. remained active as the director of Baár-Madas for five years. However, in 1995 a group obsessed by extreme right-wing ideas managed to take over the key positions in the top hierarchy of the Church, and finally Bibó Jr. himself had to leave the school. Since most of the teachers also left when he did, they decided to establish a more independent new school with a similar Reform methodology elsewhere in Budapest. This school, the János Sylvester Protestant Grammar School, was founded in 1997. For the first ten years, Bibó Jr. served as the director. In the meantime, he himself taught art history, and he worked as an expert for the National Office for Monument Protection. In 1996, he completed his Ph.D. in Art History, and in 2011–12 he taught as a lecturer in the Doctoral School of the ELTE Art History Department.

By the end of 2001, he had retired. In 2002, his wife passed away. He has four sons and ten grandchildren. He is the Chairman of the European Protestant Hungarian Free University Association and the curator of Árpád Göncz Foundation. In addition to pursuing his own research and publications, he dedicated much of his time over the course of the past forty years to the preservation and publication of his father’s oeuvre and personal memories. (István Bibó, 1911–1979, politician, political theorist, and scholar on the philosophy of law)