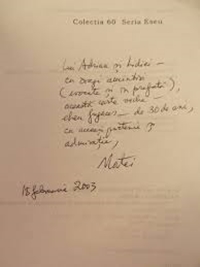 Adrian Marino had an ample correspondence with Romanian intellectuals in exile, a correspondence that is preserved in his collection. It is worth noting the volume and content of his correspondence with the literary historian and critic Matei Călinescu, who defected to the USA in 1973, and went on to teach at Indiana University Bloomington. The letters received by Marino from Matei Călinescu can be found in the original in the files of his personal archive donated to BCU Cluj, while those received by the Călinescu from Marino were copied after 1989 and archived carefully in the collection. In these letters, Marino criticised Romanian literary life, the fierce competition among writers for positions in state cultural institutions in Romania, and the censorship practised by the publishing houses of the time. As their correspondence was monitored by the Securitate, Marino avoided formulating any critical political opinions and confined himself to cultural topics.

In the letter sent by Adrian Marino to Matei Călinescu on February 26, 1968, the former congratulates the latter for not being in the country to witness a literary life which he characterises as being “increasingly convulsive and thus sterile” (Marino 2010, 32). The “convulsiveness” was caused by the intensification at the end of the 1960s of the competition between various literary groups for positions which allowed the allocation of financial resources. In this case, the letter addressed to Matei Călinescu (who was in London) is written in the context of the departure of Eugen Barbu – one of the most controversial Romanian writers of the communist period – from the position of editor in chief of the literary magazine Luceafărul (The Evening Star), which was issued by the Writers’ Union of Romania and aimed at promoting young talents. Marino deplored the fact that literary life was “unpredictable” because of the frequent changes of the people who occupied leadership positions in publishing houses and literary magazines, which threatened the prospects of certain of his editorial projects. Dissatisfied with the tense atmosphere within the cultural institutions, Marino proposed withdrawal from public life and wished to emerge himself in his own cultural projects stating that: “We need the passion for study in itself, for itself” (Marino 2010, 32).