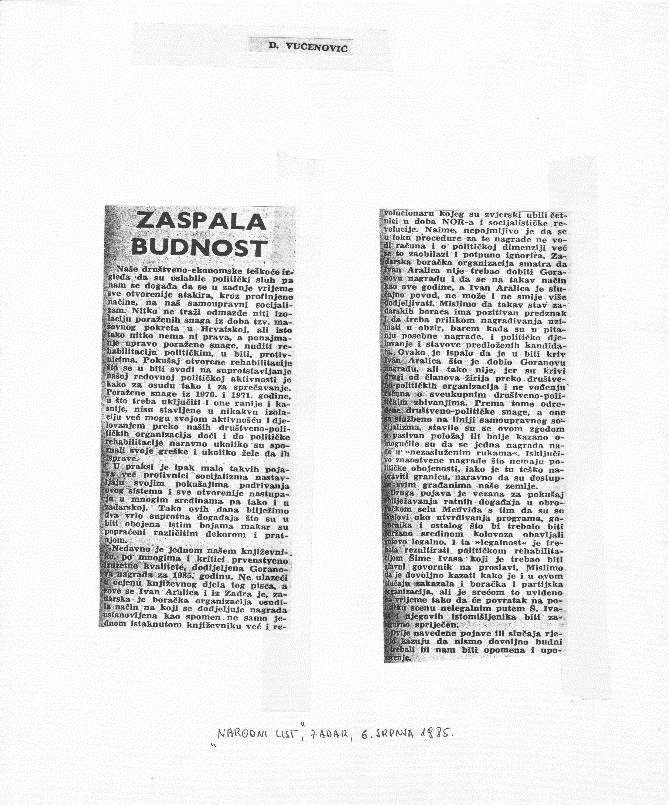 After Ivan Aralica had been granted the Vjesnik literary Ivan Goran Kovačić Award for literature, members of the Zadar branch of SUBNOR condemned this act. This was first commented by the local weekly Narodni list in a lead under headline “Vigilance fell asleep” written by the editor-in-chief Dane Vučenović. In the article, the frequency of attacks on self-management socialism is mentioned and the attempts of “defeated groups from the era of the so-called ‘massive movement in Croatia’.” Vučenović stressed that in that period the opponents of socialism increasingly came out openly in many centres, and so in Zadar, where the writer Ivan Aralica lives, the winner of the Ivan Goran Kovačić Award for the novel The Souls of Slaves (1984). He agreed with the SUBNOR Zadar branch, which criticized the Vjesnik jury for giving the award to a writer whose profile was inadequate because of his participation in the Croatian Spring in Zadar. “We think that such an attitude of the Zadar veterans has a positive significance, and that in the process of giving awards, the political profiles of candidates should be taken into account, at least when special awards are at stake,” Dane Vučenović concluded, indirectly pleading for interventionism in the assessment of literary works.

Ivan Aralica himself stated in his letter of 26 July 1985 to Zlatko Crnković that this lead was an overture for the attacks on him: “It has been a long time since I wanted to write to you, ever since I came to Zagreb at the beginning of July, because right on the eve of my departure from Zadar the campaign against me started with the lead in Narodni list (Aralica and Crnković 1998, 123).