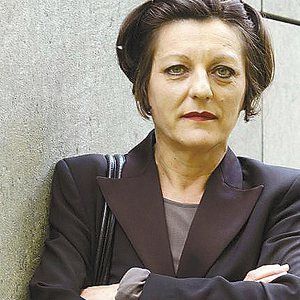 Herta Müller is a Romanian-born German novelist, poet, and essayist and the recipient of the 2009 Nobel Prize in Literature. She was born on 17 August 1953 in Nițchidorf, Timiș County in Romania in a traditional Swabian family. Her father joined the Waffen SS during World War II and her mother was among the German ethnics who were deported from Romania to the Soviet Union in 1945 and released five years later. Herta Müller graduated in German studies and Romanian literature from the Western University of Timișoara and was hired as a translator in 1976 in an engineering factory in Timișoara. Because she refused to become its informer in 1979, the Romanian secret police began harassing her and soon after this she was unemployed and with slim chances of finding work as the Securitate warned prospective employers about her “hostile” activities against the communist regime. Moreover, this harassment by the Securitate and the subsequent social marginalisation coincided with the death of her father. As Herta Müller has mentioned on several occasions, she began to write as way to escape the problems in her life and to find a support that she could hold on to. She joined the former members of the suppressed nonconformist literary circle Aktionsgruppe Banat, and their support and friendship helped her to resist the harassment of the Securitate and continue writing. In 1982 her first book, Niederungen (Nadirs), was published in Romania at the Kriterion publishing house. Apart from outlining the moral and cultural decay of the German communities, her book also painted an unflattering image of the communist system and of life in the countryside that contrasted greatly with the official view, which insisted on the beneficial changes brought by socialism in rural areas. One year after the publication of Müller’s book, the communist authorities ordered that she be put under informative surveillance. The surveillance intensified as she managed to have Niederungen (Nadirs) published by a Western publishing house. Consequently, the Securitate began to see Herta Müller as a person conducting “hostile” actions “against socialist order,” as it feared that her criticism of the regime could cause a deterioration of the image of Romania in the Western world. Despite the enthusiastic reception of her first book abroad, Müller continued to be harassed by the Securitate and lost her position. Moreover, her officially approved journeys to West Germany to receive a literary award and participate in book fairs became part of the Securitate’s plans to “annihilate her influence inside and outside the country” as it launched the rumour that she was its agent and that it was for this reason that she was allowed to travel to the West. To the dismay of her acquaintances and of the Securitate, Müller chose to return to Romania after each of her trips abroad and continued to publish her short stories in the Romanian German-language press, bringing out another book, Drückender Tango (Oppressive Tango), at the same Kriterion publishing house in 1984. In September 1985 Herta Müller, together with other German writers, signed a collective memorandum addressed to the local Party secretary in which they denounced the lack of artistic liberty and the involvement of the Securitate in curtailing their freedom of speech and hindering their artistic initiatives. This episode only managed to anger the Securitate and as a result she again lost her position. Moreover, Müller ran out of money as the revenues from the German edition of Niederungen (Nadirs) went to the official body of Romanian writers. After a year and half during which the Securitate continued to harass her, Herta Müller and her husband Richard Wagner were allowed to emigrate in 1987. They settled in West Berlin, where she continued to write about her experience and life in communist Romania. Her novel Der Fuchs war damals schon der Jäger (The Fox Was Ever the Hunter) published in 1986 captures the distress, angst and humiliation experience by the main character, whose private life is the object of constant intrusion by the secret police, whose officials cut a piece from a fox fur every time they search the house. In the novel Heute wär ich mir lieber nicht begegnet (The Appointment), she describes the anxiety and the struggle to maintain mental balance of a young girl who is periodically summoned to the secret police. In October 2009, the Swedish Academy announced its decision to award that year's Nobel Prize in Literature to Müller, “who, with the concentration of poetry and the frankness of prose, depicts the landscape of the dispossessed. ”