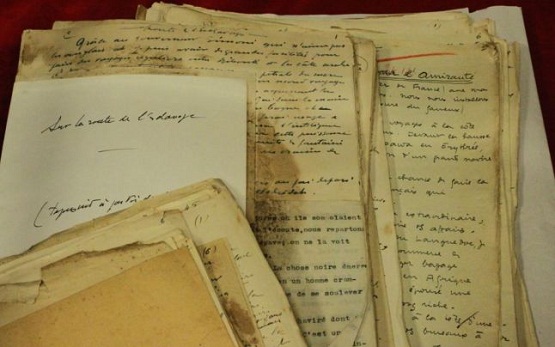 Ce pot învăţa în timp de o zi (What I can learn in a day) is a three-page essay written in March 1927, when Emil Cioran was sixteen years old. The manuscript reflects the sources of Emil Cioran’s intellectual formation and the way the experiences of his youth shaped his personality. The text is written by hand in black ink. On the first page of the document there is a comment by his brother Aurel Cioran with the question: “Has he published it [the manuscript]?” and his answer: “Probably, not.”
The essay offers an insight into Cioran’s inner world as a student of Gheorghe Lazăr High School in Sibiu, Romania. The text gives us a picture of the everyday concerns of the teenage Emil Cioran. Although for the young Emil Cioran, born in Răşinari, a traditional village in the Carpathian Mountains, Sibiu offered the first experience of a cosmopolitan cultural milieu, the bourgeois character of the Transylvanian town made him at the same time feel restricted. Starting from this feeling he questions himself about his capacity to overcome the routine of everyday life and the moral values of a petty-bourgeois social milieu. One of the limits that the teenage Cioran has to face is that of the severe programme of the high school. This makes him to compare the school with a “boring refrain” and with “bad prose” (Manuscript, 3). Consequently, his interest in school is pale in comparison with independent reading. He ends his essay by highlighting the contrasts and paradoxes of his everyday life, a topic which he was to develop later in many of his mature essays.