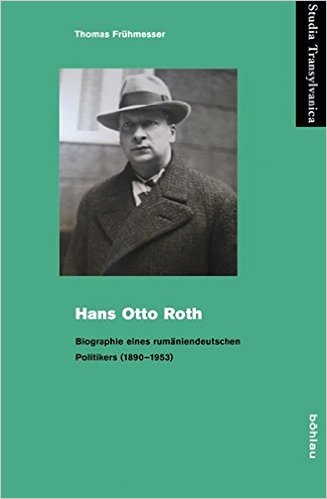 Hans Otto Roth was one of the most important politicians and journalists of the German minority of Romania, who took a public stance against the Nazi movement established by the Romanian Germans, and later also against the communist regime.
Born in Sighişoara on 29 April 1890 in a Transylvanian Saxon middle class family, Roth followed his father’s footsteps and studied law at the universities of Budapest, Vienna, Berlin, and Zürich between 1908 and 1912. He received a PhD in law from the University of Budapest in 1913. Between 1915 and 1917, he fought in the First World War as a soldier in the Austro-Hungarian army. During the last year of war, he was a journalist for Siebenbürgisch-Deutsches Tageblatt (The German Transylvanian Newspaper). After the war, Roth became involved in political life and was elected ten times deputy in the Romanian Parliament between 1919 and 1938. Between 1932 and 1949, he was also general curator of the Evangelical Church of Augustan Confession of Romania (Landeskirchenkurator). In this position, Roth fought against the takeover of denominational schools by the German Ethnic Group of Romania in 1940.
Between 1931 and 1934, Roth occupied the position of president of the Organisation of German Minorities in Europe (Verband der deutschen Volksgruppen in Europa). From this position he protested against the politics of the Reich towards the Jews during an audience with Hitler in June 1933, when he argued that it would affect the status of the German minorities in Eastern Europe (Kroner 2016). Because of his anti-Nazi attitude, Roth was removed from the political life of the community in 1940  by the leaders of the German Ethnic Group of Romania. After Romania left the Axis powers on 23 August 1944, Roth and the future bishop Friedrich Müller became the leaders of the German minority in Romania and forced Wilhelm Staedel – the pro-Nazi bishop of the Evangelical Church – to resign his position. Roth supported the de-Nazification the German minority of Romania. At the same time, he opposed the abuses committed by the Soviet and Romanian authorities, such as the deportation of a large part of the German adult population in Romania to forced labour camps in the USSR and the confiscation of their property. The numerous reports which Roth sent to political decision makers or institutions in charge of implementing these repressive measures bear witness to his anti-communist stance. Consequently, Roth was arrested in July 1948 and imprisoned for six months for his alleged mismanagement of the General Savings Bank of Sibiu (Hermannstädter Allgemeine Sparkasse). After a short release, Roth was arrested again in 1952, and died in an internment camp in April 1953.