Letter from an unknown Romanian citizen to Voice of America, in Romanian, September 1989 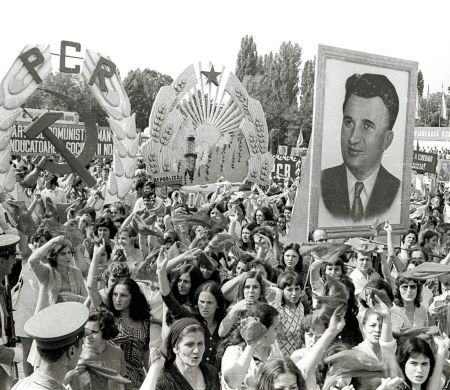 The letter, which reached Voice of America radio station in the autumn of 1989, represents an ample critical analysis of the practice of the personality cult adopted by the Ceauşescu family, a phenomenon which reached the limits of the absurd in Romania in the 1980s. The author, an unidentified Romanian citizen who had emigrated to France in the autumn of 1989, succeeded, before his departure from Romania, in capturing the reactions of people in Iaşi to the official visit of the presidential family on 13–15 September 1989. According to his letter, the “masquerade” began several days before the arrival of the Ceauşescu family. The letter ironically recounts the fact that the preparations for the official visit did not take into consideration the shortage of food and the weather. Thus, during the rehearsals, “small children were dressed in national costumes and kept in the cold or in the rain,” while party agitators went through the city with loudspeakers instructing the population to chant “hurrah!” at the passage of the car with the presidential couple. The agitators also encouraged people through the loudspeakers not to give the president any letters, but to give them to their factory managers. The local elite wanted to avoid a situation in which the “most beloved son of the people,” as the president was called at that time, might be disturbed by the population’s complaints. The author of the letter also analysed the role of the nomenklatura in preserving this personality cult, as well as their abusive behaviour. For example, he noticed that the heads of factories represented “a new class of nomenklatura, with discretionary powers.”

In the end, the letter received by the radio station highlights the population’s general discontentment, which was manifest, on the one hand, through various outlets such as humour, and, on the other hand, through spontaneous acts of revolt. As for the jokes about the Ceauşescu couple, the letter described a discussion in a tramway. One of the people observed with irony that the pigs on exhibition in the town centre were very big, but none were as big as Ceauşescu. The absurd of the situation consists in the fact that the exhibition in question was meant to prove the richness of the country’s agriculture while the population suffered from a severe food shortage. As an act of revolt, the author mentioned that the glass windows of the Moldova general store in Iaşi had been covered with graffiti: “Bring down the dictatorship! Bring down Ceauşescu! Bring down communism!” Offering a wealth of details about the population’s state of mind, the letter is a document reflecting the frustration which dominated Romanian society before the collapse of the regime in December 1989.