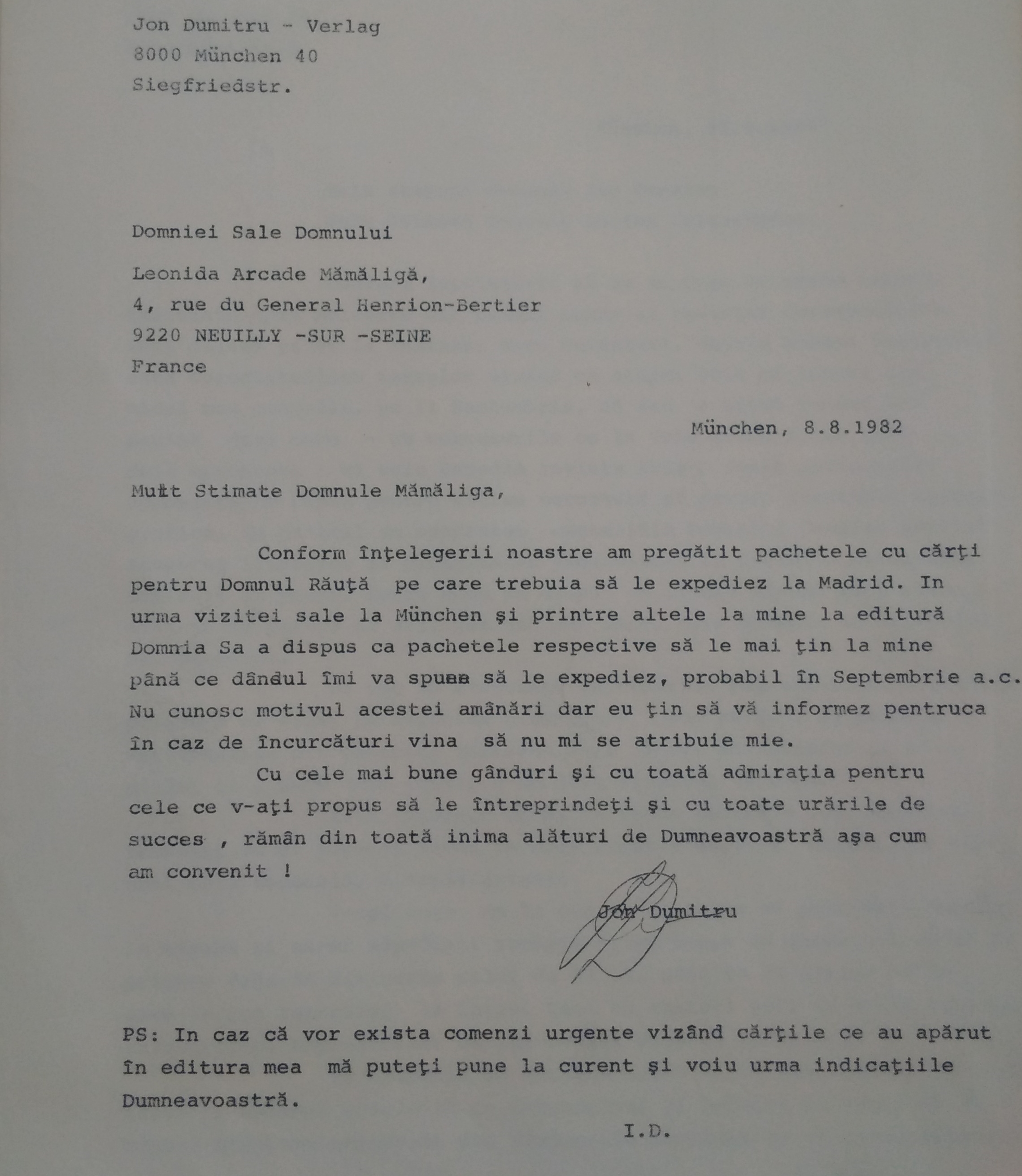 This document contributes to the understanding of the activity of the postwar Romanian exile community in the 1980s, especially regarding the correspondence and interaction between its most active members. During the communist period in Romania, the Romanians of the emigration were in general located at significant distances from each other, being settled on several continents: Europe, North America, South America, Australia, and Africa. The most active of them founded organisations, associations, institutions, institutes, foundations, publications, and publishing houses in their countries of residence. The purposes of their efforts were to: represent the Romanian nation, its democratic values and principles, and to defend its interests until the collapse of the communist regime; to coordinate the activity of Romanians abroad to carry out activities that would help to restore the democratic system in Romania; to represent the exile community within democratic societies and solve its problems; to establish links with Western governments and international organisations; to collaborate with representatives of the other "captive nations" in Central and Eastern Europe to form a common front to unmask and remove communism. Such an approach was also that of Ion Dumitru, a personality of the exile community, who set up in the mid-1960s one of the most important publishing houses of the Romanian emigration. It was founded in Munich, where he settled in 1961, and was officially registered in 1976 as a printing company. The Ion Dumitru Publishing House published over eighty books by exiled Romanians, many of them extremely valuable for national culture and history. To acquire such volumes, the owner of the publishing house, Ion Dumitru, maintained an ample correspondence with those interested. A proof of these relationships is this letter, which Ion Dumitru addressed to Leonid Mămăligă on 8 August 1982. Leonid Mămăligă, who wrote under the name L.M. Arcade , was a personality of the Romanian exile community, in which he made a name for himself, in particular, through the establishment and coordination for more than thirty years (1958–1989) of the Neuilly-sur-Seine Cenacle. The purpose of this cenacle, unique in France during those years of exile, was respond to the need for a Romanian place to offer Romanian intellectuals outside the country the possibility of thematic meetings and discussions. Also, the cenacle represented a platform of expression for Romanian intellectuals in exile, which helped them to keep alive the Romanian identity abroad and to put Romanian culture in communication with that of France. At the same time, the cenacle stimulated the act of creation both in Romanian and in French, by supporting and promoting Romanian writing, as it had its own publishing house, Caietele Inorogului (The unicorn notebooks). As or the subject of the letter that Ion Dumitru addressed to Leonid Mămăligă, in it he talks about sending a package of books published by his publishing house for another well-known Romanian exile, Aurel Răuţă, a professor at the University of Salamanca, Spain. Aurel Răuţă was a notable personality of the exile community because of his publishing activity and the founding, among others, of the Asociația Hyperion (Hyperion Association) in Paris. This was a distribution platform for books by Romanians in exile. In ten years of activity, he distributed to Romanian emigrants more than 10,000 volumes, published at more than 130 publishing houses. The document in the Ion Dumitru Collection in the IICCMER archive is a copy in A4 format.