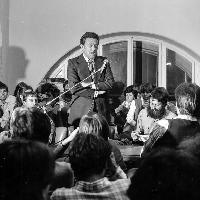 Reports of the state security about the ’Közgáz-klub’
The reports that agents compiled about the Közgáz-klub were saved at the Historical Archives of the Hungarian State Security (Állambiztonsági Szolgálatok Történeti Levéltára, or ÁBTL). Through these documents, we can gain an insight into the critical and free-spirited debates that took place among students and these sources also show us what the state security thought to be a dangerous phenomenon in the 1980s. The task of the agents was to observe the students whom were regarded to be opposition figures, finding the main actors and preventing the association of young people from different universities.
lasīt vairāk

Resistance of Turkish Minority in Bulgaria
The collection was established in the period from 2010 to 2016. It includes personal memories and materials of members of the Turkish minority of Bulgaria, who today live in different countries, most of them in Turkey. The collection sheds light on the life of ethnic Turks in Bulgaria and their responses to the contradictory politics, in long periods - discriminatory and assimilatory, of the socialist state.
lasīt vairāk

The Lucian Ionică private collection is one of the few collections of snapshots taken during the tensest and most feverish days of the Romanian Revolution of December 1989 in the city of Timişoara, the place where the popular revolt against the communist dictatorship first broke out. The photographic documents in this collection preserve the memory both of the dramatic moments before the change of regime and of the days immediately after the fall of Nicolae Ceauşescu, when sudden freedom of expression produced moments no less significant for the recent history of Romania.

Rezső Szabó is a Hungarian lawyer and politician from Slovakia. His personal collection contains documents dealing with policies toward the Hungarian minority in Czechoslovakia including issues of culture and education in the languages of the minority. These documents are mostly from the time when Szabó was Secretary of the Hungarian Cultural Union CSEMADOK (1954-1969) and the time when he sat in the Czechoslovak Federal Assembly (1969-1971). The collection contains documents related to Szabó’s activities in 1968, when he was one of the activists who outlined requirements about reforms concerning the rights of minorities in Czechoslovakia. These documents are mainly bill drafts and laws concerning the problems of the Hungarian minority. The collection also contains a recording of a long interview with Szabó made in 2004.

The collection shows the life, work and activities of the Lithuanian historian Rimantas Jasas (1929-2002). Jasas never called himself a dissident. Even after the collapse of the Soviet Union, he did not speak much about his involvement in underground (samizdat) literature, and saw himself only as a professional historian. The files in the collection show his close ties with the dissident movement, especially with the Soviet dissident and political prisoner Vytautas Skuodis (1929-2016). Jasas was involved with the samizdat journal Perspektyvos (Perspectives), the most highly thought-of publication by members of the intelligentsia.