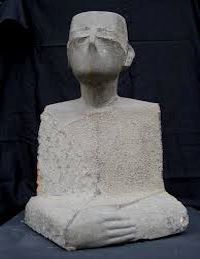 Ziyatin Nuriev was born in the village of Most, municipality of Kardzhali (1955). He graduated from the High School of Arts in Kazanlak and then studied painting at the National Academy of Arts in Sofia. During his second year at the Academy, he changed his speciality to sculpture in the class of Prof. Iliya Iliev. Nuriev graduated from the Academy in 1982.

Initially, Ziyatin Nuriev worked with basalt, one of the hardest materials. His favourite themes are the figure and the portrait. He took the human figure to abstract form using various materials – marble, bronze, wood, ceramics. Even his first participations in national exhibitions were noticed – in 1985, in the National Youth Exhibition, he won the prize of the Union of Bulgarian Painters and two years later, he received the annual prize in sculpture of the Union of Bulgarian Painters. Some of his works were bought by the National Art Gallery, the Sofia City Art Gallery and other leading galleries in the country.

During the so-called Revival Process (an attempt of the Bulgarian Communist Party to forcibly assimilate the Muslim population – Turks, Pomaks, Tatars, Roma), the name of Ziyatin Nuriev was changed to Zlatin Norev. The Revival Process began in the early 1970s and continued until the end of state socialism. The measures for the implementation of this policy included forced change of the Arabic-Turkish names with Bulgarian, restrictions in the use of the mother tongue by representatives of the above-mentioned groups, forced restraint of their traditional customs and rituals and of the use of their religion. The assimilation policy of the socialist authorities provoked a wave of resistance which played a significant role in the development of open civil opposition to the communist regime.

Until 1990, Ziyatin Nuriev worked in Bulgaria but afterwords he moved to Istanbul.

When often asked if he feels distressed about Bulgaria because of the "Revival Process" and the change of names, Ziyatin Nuriev answers: "I was distressed about the country not as people but, let's say, as government. How could I be distressed and offended by my friends, acquaintances, neighbours? It wasn't their fault. They were even more surprised and frightened than us. Because we were in a way prepared in advance. Something was telling us it was going to happen. I remember many people, colleagues and friends, who literally broke into tears. But these are other things – ethnical affiliation, this and that; that's not a problem for me. This is a wholly different story. If you ask me if I'm offended or distressed about Bulgaria – no, absolutely not. Because Bulgaria is my home. I'm glad that I was not alone at the exhibition last night. [...] I'm not a patriot, neither Bulgarian nor Turkish." (Dzhambazov 2016)

"The changes in Bulgaria in the 1990s enabled my departure for the megalopolis [Istanbul – A.K.]. But it wasn't planned. I didn't want to leave my own country. Remember the insanity of 1989 when many people were expelled or forced to leave the homeland. Not that I didn't want to see the world and live in it but I didn't want it to happen that way. That's why I arrived in Istanbul as an ordinary tourist, not an exile (1990). It was summertime and with a friend of mine went to see the museums. We walked along the İstiklal Avenue and then entered the trade centre for textiles and fashion. We were filled right away with a sense of luxury and glitter, felt the smell of incredible scents. I introduced myself to the manager and showed her my brochure. It turned out that we were at "Vakko", chain stores with galleries located in the biggest Turkish cities – Istanbul, Ankara, İzmir... My first exhibition in Turkey was at Vakko in Ankara in 1991. The same year, I was offered a lecturer's position at the Faculty of Fine Arts at the Marmara University. For 16 years now, I lead there the workshop on stone-cutting which I actually founded. [...]

Do you remember the Revival Process?

- We all have to remember it so that we won't repeat the same savagery. But I must also forget about it because of the relations with my friends, fellow-citizens, compatriots" (Cesur 2006).

Ziyatin Nuriev participated in international symposia and exhibitions in Poland, Turkey, Japan, the Canary Islands and others. He never broke his connection with Bulgaria; he had exhibitions in Burgas (Prolet Gallery, 2006??), Varna (Gallery 8, 2014), Plovdiv (Resonance Gallery, 2015), Kardzhali and Sofia (2016). His sculptures can be seen in many Bulgarian towns and cities.

The sculpture "Window" was created in 1985, the year when the campaign for a large-scale change of the Arabic-Turkish names with Bulgarian was at its height; all administrative structures, the repressive apparatus and the state organizations of the totalitarian regime were engaged; in only two months, the names of over 800 000 people were changed. The assimilation policy of the socialist authorities provoked a wave of resistance which played a significant role in the development of open civil opposition to the communist regime.

Although the author says that they are not directly related to the "Revival Process", the works of Ziyatin Nuriev express his protest. Despite the similarity in material and technique between "Window" and his earlier works ("Dream", 1982; "White Light", 1983; "Head", 1984), the difference in the message of the sculpture is considerable: "The wound of unbearable violence is engraved in this sculpture; a wound on the person's morals, on the family, the society. The window of Ziyatin Nuriev gives us the possibility and the impossibility to touch what we won't ever experience. The possibility – because he has brought out to the surface the iceberg of pain; the impossibility – because he has locked up all external expressions of pain.

The eyes are missing.

The lips are missing.

In the place of the eyes, from the meandering edge of the eyelid line, depending on the light, the shadows casted could call the look of sorrow from which a sigh slips out whispering.

In the place of the lips, on the border where the two halves of the face meet, the concealed lamentation passes over, the red vertical line of the silence.

Ziyatin chooses for the first and may be for the last time the bust, the most used pattern for heroization of the character. He deprives his character of individual characteristics but presents him with plastic uniqueness – he takes from the crown, prolongs the scull, flattens the body, marks the nose and cuts the volumes by sharp edges. He includes the clasped hands which emphasize the geometry of the forms as well as the delicacy of the details. At first, the sculpture looks deceivably fragile but it has the mighty hardness of the basalt. The differences in the texture of the basalt cause differences in the shades of grey. This is particularly visible in the place of the eyes; the tangle of dark and light spots begins from the area of the eyes, runs through the temples and reaches the back of the head. The grief is transformed into enlightenment. The shades of grey are not enough and Ziyatin uses brick-red to wound particular edges or places of the head and the body.