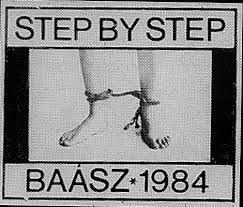 Step by Step is a mail artwork from the beginning of the 1980s which Baász made for a Hungarian exhibition. The stamp depicts a pair of legs tied together, which obviously carried ambiguous meanings at the time. Baász made it for the International Mail Art Exhibition curated by Antal Vásárhelyi and organized by the Young Artists’ Association in Budapest in 1984. The work was highly celebrated and published the same year in Élet és Irodalom [Life and Literature], a Hungarian weekly, as an illustration for János Bencze’s article Szabadlábon [At Large]. The artwork provoked a conviction from the Romanian embassy in Budapest and ultimately served as a pretense for the interrogations to which Baász was subjected by the Romanian political police between October 3 and 8, 1984. It was during this interrogation-series that Baász formulated his ars poetica.

The real importance of the selected work is actually of another nature. The genre merits emphasis, as it is is the key to the whole piece. In the 1980s, when communication was entirely supervised, mail art served as a perfect transmission tool among artists. The aim of creating a web of radical artists throughout Europe was a purely aesthetic and apolitical goal.