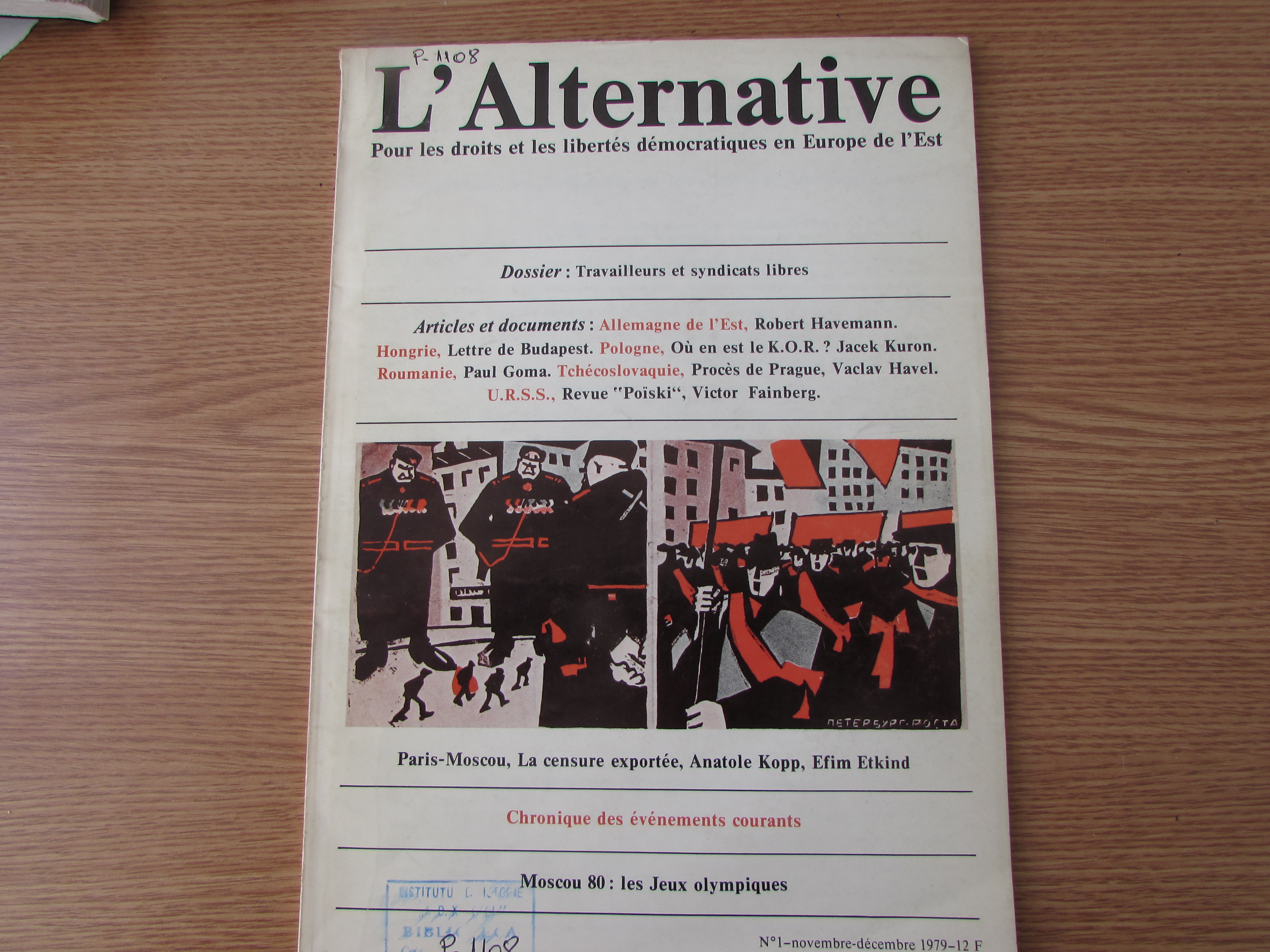 After his growing involvement in the support for the sporadic acts of dissent and anti-regime opposition in Romania was triggered by the case of Paul Goma and the “Goma movement” in February 1977, Mihnea Berindei became a central figure within the Romanian exile community in France. He was associated, in particular, with several editorial projects initiated in exile but specifically designed to give a voice to dissidents and opposition figures from Eastern Europe. The journal L’Alternative was perhaps the most important initiative of this kind. Founded by editor and journalist François Maspero, this publication included in its editorial board several expatriates from among the East European intellectuals and public figures who had settled in the West (e.g., Efim Etkind, Viktor Fainberg, Paul Goma, Miklos Haraszti, Jan Kavan, Jiri Pelikan, Leonid Pliushch, Krzysztof Pomian, etc.). The journal was conceived as a trans-national endeavour aimed at reflecting “the struggle […] for democratic freedoms, both individual and collective, and against their repression.” In a special declaration of the journal’s founders, published in its first issue, the aims of the new publication were defined as “gathering information, documents, and opinions originating with different groups or individuals who take part in these struggles or who, to put it simply, are victims of this repression; giving to the mass of the anonymous, of the workers, the opportunity to be heard; stimulating journalistic inquiries, dossiers and reports; being a place of dialogue”. The priorities of the new journal were thus the “concrete and systematic defence” of the opponents and victims of the communist regimes and an “active solidarity” with the “struggle for democratic rights.” Ideologically, although it declared itself “independent,” the journal was closest to the anti-communist and “anti-totalitarian” left that was increasingly visible on the French political stage at the time. It emphasised the role of public opinion and its attempt to “bring the first elements of a dialogue” between East European dissidents /opponents of the regimes and their supporters in the West. The first issue had at its core a special file (dossier) on “free workers and trade unions” (travailleurs et syndicats libres), featuring various reports from the Soviet Union, Poland, Czechoslovakia, and Romania. The section about Romania focused on the case of Paul Goma. An essay by Goma on the relationship between the workers and the communist state – The “Workers’ State” and the Working Class (« Etat ouvrier » et classe ouvrière) – was published. This essay presented certain aspects of the Romanian workers’ everyday life and reminded the reader about the main stages of workers’ protest, starting with February 1977. This section also discussed the formation of the first “free” trade union in Romania – The Free Trade Union of the Working People of Romania (Sindicatul Liber al Oamenilor Muncii din România, SLOMR), emphasising the solidarity of the main French unions with their Romanian counterpart. Under the “Documents” section, the journal published important pieces by Jacek Kuron on the Workers’ Defence Committee (KOR), as well as Vaclav Havel’s famous essay Living in Truth, the most significant text associated with the Charter 77 movement in Czechoslovakia. Other materials discussed developments in East Germany, Hungary, and the USSR, with a particular emphasis on the cultural sphere. Special attention was devoted to initiatives for the defence of persecuted anti-regime activists in the context of the growing repressions in Czechoslovakia (such as the Committee for the Defence of the Unjustly Prosecuted, VONS). A separate subject concerned the upcoming 1980 Olympic Games in Moscow, including several appeals for a boycott of the event on political and moral grounds. Finally, a “chronicle of current events” focusing on the reporting of recent developments in the Eastern bloc countries was inaugurated as a regular item in the journal. L’Alternative became one of the most important French-language publications dealing with Eastern Europe. During its existence (1979–1985) it published numerous reports and texts relating to communist Romania. In the early 1980s, Mihnea Berindei became closely associated with the journal, providing a vital link between the French readership and Romanian authors criticising the regime, either in Romania or in exile.