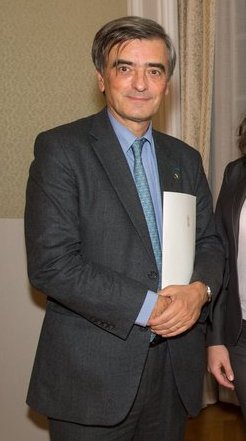 György Károlyi is a French diplomat, jurist and economist of Hungarian origin. He was born to a famous Hungarian noble family in 1946. The following year, his family was forced to leave Hungary due to the rising power of the communists. Károlyi grew up in France, and studied economics, political science and jurisprudence at the University of Paris. He was a salesman at the Aerospatiale Company (1971–1974), and legal adviser to the Chamber of Commerce and Trade of Paris (1974–1978). From 1978 through 2005 he worked in different leading positions at the Parisian branch of Fiat Automotives. In 1994 he founded the non-profit, Joseph Károlyi Foundation, and the Corporation for Developing and Operating the Károlyi Castle of Fehérvárcsurgó, in 2000. He became the general manager of the corporation. Since 2014 he has served as the ambassador of Hungary in France.