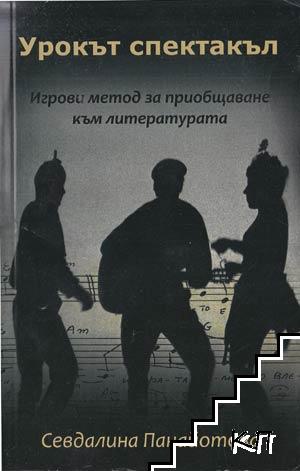 The book "The Performance Lesson: Game Method of Inclusion in Literature" was published shortly before Sevdalina Panayotova's death on 27 September 2014. Sevdalina Panayotova was the founder of the "Spectacular Lesson" method for teaching literature through theater.

The book contains a description of the "lesson-spectacle" method developed by Sevdalina Panayotova, and six scripts for dramas adapted from Bulgarian and classic word literature. Sevdalina Panayotova's reading of the literary works is unconventional: she enriched the scenes with descriptions of the time period, she used forbidden literature (works of symbolists, for example), and she directed attention to forgotten or forbidden stories about authors such as the proletarian poets Hristo Smirnenski and Nikola Vaptsarov. Through her works, she taught critical thinking, and civic responsibility.

She began writing theatrical scenes in 1960s and they developed over the years. Each class performed The Little Prince by Antoine de Saint-Exupéry; About the Letters, based on texts of medieval Bulgarian literature; Vaptsarov - Eternal and Contemporary and The Mansard of Dreams from verses by symbolists, and other works. Her productions enjoyed great success among her students. The performances of these scenes were innovative, highly artistic, acknowledged by lecturers at the Krastyo Sarafov Higher Institute for Theater Arts (now known as the National Academy of Theater and Film Arts) and directors, and commissions which reviewed amateur theater. Nevertheless, her works also drew the suspicion of the state authorities.