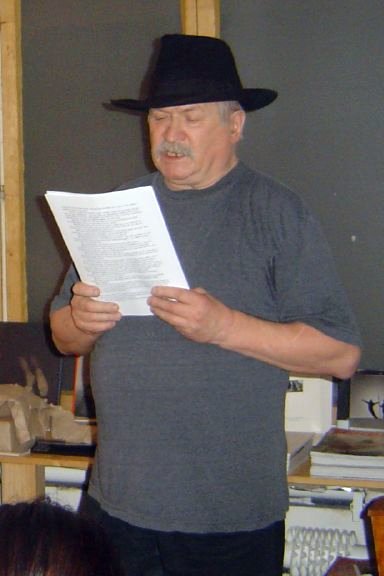 Ivan Martin Jirous, also known under the pseudonym of “Magor“ (“madman”, “fool” – though in a positive sense), was a Czech poet, art historian, and leader and theoretician of the Czech underground. He signed Charter 77 and was the manager of the art music band “The Plastic People of the Universe”. In the seventies and eighties he was in prison five times (a total of eight years and six months) as a result of his cultural activities and attitude towards the system.

In 1963, Jirous began studying art history at the Faculty of Arts in Prague, and graduated in 1968 with a defence of his master thesis about the poet and artist Jiří Kolář. At the end of the sixties, he officially published art-theory texts, while from the beginning of the seventies he worked either as a labourer or was unemployed. At the end of the sixties, he collaborated with the Czech rock-music band “The Primitives Group”, which played psychedelic music. From 1969 he was the art leader of the underground music band “The Plastic People of the Universe” (PPU). One of Jirous’s most important essays was an introduction to the Czech underground “Notes on the Third Czech Musical Revival”. Jirous defined its fundamental values and artistic basis in a programme statement of the underground, where he emphasized authenticity in life and in creativity within the context of communist power. “Notes” was published in 1975 as a samizdat volume (entitled “Notes from the Czech Musical Underground”) and after that in the exile magazine “Testimony” (Svědectví, Paris 1976).

Jirous organized numerous concerts, public lectures and cultural events, for example, “Festivals of the second culture” (1974 in Postupice, 1976 in Bojanovice – connected with his wedding with Juliana Jirousová). The concert in Bojanovice, where The Plastic People of the Universe and others underground bands performed, was held in the hall of a village restaurant and became a pretext for repressive action taken by the police against sympathizers of the underground community – nineteen people were taken into custody and were charged with disturbing the peace. Most of them were members of the music groups PPU and DG 307. This case became a cause célèbre after the friends of the detainees termed the trial as political in a message to Amnesty International, and it was then brought to the attention of the Western media.

Many people from Czech cultural and intellectual life supported the accused (for example, Václav Havel, the philosophers Jan Patočka and Karel Kosík, and the writer and Nobel Prize winner Jaroslav Seifert). These people were later connected with the origins of Charter 77. On the other hand, the official propaganda campaign described the defendants as drug addicts and social parasites. It led to two trials with seven people convicted. In the second trial (the ‘Prague’ trial), Jirous was sentenced to 18 months in prison, and the musicians Pavel Zajíček, Svatopluk Karásek for one year and Vratislav Brabenec for eight months. One immediate consequence of the trial of Jirous and the others members of the underground was the establishment of the opposition initiative “Charter 77”; in connection with the international commitment of Czechoslovakia to respect human rights, which was declared at the Conference on Security and Co-operation in Europe in 1975 in Helsinki. Jirous signed Charter 77 after his release from prison in 1978 (his ex-wife, the poet and art historian Věra Jirousová, and his wife, the painter Juliana Jirousová, also signed the charter).

Most of Jirous’s sentences were classified as disturbing the peace (§ 202). In fact, it is possible to speak about the politically motivated trials connected with his political convictions and his cultural activities. He was imprisoned for: singing an anti-communist song (“Send the Russian killers to hell where they belong”) and arguing with a retired Security Service Major (StB; 1973–74); for activities linked with the band “The Plastic People of the Universe (1976–77); for offending a communist functionary (1978; he made a speech at a Jiří Lacina exhibition about the insurmountable differences between official and unofficial culture); due to his role in producing, publishing and distributing the samizdat magazine “Vokno” (1981–85); for the activities around the petition “Tak dost”, which was connected to the last victim of the communist regime, the political prisoner Pavel Wonka. After his release from prison in 1985, Jirous was on parole and had to report daily to the Public Security Office at a specified time.

His prison experience is reflected in the collection of poems “Magor’s Swan Songs”. The collection was created during his terms of imprisonment from 1981 to 1985 and was originally published as a samizdat volume. The collection won the Tom Stoppard Prize in 1985. Jirous’s poems from this collection have appeared in many translated anthologies (English, German, French, Polish, Russian). In 2006, Jirous was awarded the Jaroslav Seifert Prize for this collection and his overall literary achievement. He published ten collections of poems as samizdat volumes. Jirous’s poetry work came out in 1989 in a collected volume “Magor’s summa” (Magorova summa). His work “The True Story of the Plastic People” was serialized in 1983, 1984 and 1987 in the Viennese magazine “Paternoster”, together with “Notes on the Third Czech Musical Revival”; and after that, for example, in the book “Magorův zápisník” (1997).

In the seventies and eighties he contributed to articles, critiques and polemics to many samizdat magazines, for example “Vokno” (Jirous helped found the magazine in 1979), also “Revolver Revue”, “Infoch – Information about Charter 77”, “Dialogy” and others. Jirous organized several samizdat anthologies of poems (for example “The Invalid Siblings for Egon Bondy on his 45th Birthday”, 1975). After 1989, he continued to write articles on art and other subjects, as well as poetry collections up until his death in 2011. He is now seen as a legendary figure who was crucial to the Czechoslovak underground.