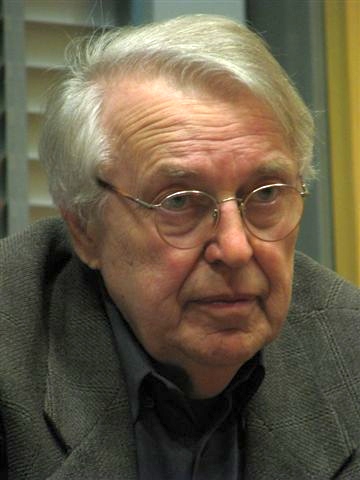 Pavel Kohout was born in Prague on the 20th July, 1928. After graduating in 1947, he studied comparative literature, aesthetics and theatre science at Charles University, but did not successfully finish his studies. From the end of the 1940s and most of the 1950s, he worked as a reporter, a commentator and a publicist in several editorial offices (Československý rozhlas, Československá televize, Československý voják). In 1949–1950, he worked in the Czechoslovak embassy in Moscow, and after his return he led the humorous magazine Dikobraz till 1952. From 1956 he became a professional writer, but in 1963-1966 he also worked as a playwright at Divadlo na Vinohradech. He has also been involved in official organisations - especially in the Czechoslovak Youth Union, later in the Union of Czechoslovak Writers - and until 1969 he was a member of the Communist Party. In 1977, he signed the Charter 77. Next year he travelled with his wife Jelena to Austria, but they were deprived of Czechoslovak citizenship and had to stay abroad. In forced exile he continued his creative activities and cooperated with exile publishing houses. After 1989 he was living alternately in Austria and Czechoslovakia /Czech Republic.

Pavel Kohout has been a writer since his youth, besides novels he also wrote poems and in the period of normalisation prose too. By the mid-1950s, he wrote highly engaging poems which were in line with current official poetics celebrating the Party's leaders, new Communist order, and the utopian prospects for the future (Verše a písně, Čas lásky a boje). Approximately since the mid-1950s, criticism of Czechoslovak society and politics become a permanent part of his texts and became a dominating theme in the years to follow (August, August, august, Bílá kniha, Nápady svaté Kláry, Hodina tance a lásky, etc.) A reflection on the period of Communism, the Prague Spring and the Soviet occupation of Czechoslovakia brings the book Z deníku kontrarevolucionáře; the reflection of the origins of the Czech dissent and the establishment of the Charter 77 brings the book Kde je zakopán pes.

The literary work was in line with the public involvement of Pavel Kohout, who gradually transformed from a prominent cultural figure of the communist regime into a vocal critic. In 1967, he criticised the 4th Congress of the Union of Czechoslovak Writers, which is considered to be one of the most important beginnings of the Prague Spring. Due to his activities in 1968, he was expelled from the Communist Party in the following year and persecuted in various ways. He participated in the establishment of the Charter 77 Declaration, being one of the first signatories.  In forced exile he contributed to the exile periodicals Svědectví a Listy.